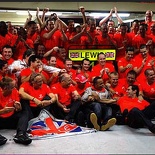 When Felipe Massa crossed the finishing line last Sunday, he was the 2008 world champion for a moment, till Lewis came and took it from him 38.9 seconds later.

For the Brazilian, it was a picture perfect finish, maintaining pole from start to finish, it was something Massa could do given the support from his fellow countryman in Brazil, but nothing can change the fact that the world title belonged to Lewis.

All what it needs to make Lewis and McLaren’s day was finishing the bare minimum fifth to win the world championship, ending the season with 98 driver points, 1 point ahead of Massa’s 97, it a complete reversal of the position for the world title one year ago. Kimi Räikkönen finished with 75 points putting the 2 Scuderia Ferrari drivers within the top 3 drivers for this season behind the Briton, with Ferrari themselves at 172 points in the constructors ahead of McLaren-Mercedes’s 151 points.

Sometime, you need not have a perfect finish everytime to see the bigger picture, and win the world champion, it just repaints the saying “losing the battle to win the war”.

Lewis finally did it, etching his name into the record books as the sport’s youngest ever world champion by claiming the fifth place he required to seal the crown, although it came in hugely dramatic circumstances with a pass on Toyota’s Timo Glock at the final corner, which was a typical “do or die” situation and I would say the main decider for the driver’s title this year.

Things are up and coming for the 23 year old Briton, with plenty of playing field and grunt ahead of him, even Michael Schumacher recently commented that he might one day go on winning more than his record of 7 world championships, there is just so much ahead of Lewis.