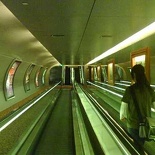 Today is green day, earth day or life earth day as you may call it. Whatever it is the least you can do is just remember to be green and wear green these two days (07-08 July). Remember, it’s environmental awareness we are talking about here so put that car or gas guzzling SUV in the park and take public transport for a change. Unless you live under a rock, you’did be aware about this and the 24hour life earth concert held round the world by artists such as Madonna, Black Eyed Peas, Kelly Clarkson, Bon Jovi, The Police, Enrique Iglesias, Faith Hill with Tim McGraw, Sheryl Crow, Damien Rice, Duran Duran and Red Hot Chilli pepper back to back just to name a few, a first and rather groundbreaking event I can say.

I was at the green day earth fest carnival at one Fullerton this afternoon today, there was a small crowd at the event compared to people at the bay area (where the NDP rehearsals are going on) completely orbvious to us there (going to show how much Singaporeans actually don’t bother about the environment). 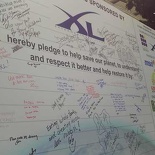 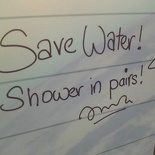 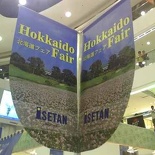 With global temperatures rising, melting ice caps, retreating glaciers, floods & prolonged drought, this is just one of the rather global efforts to curb the problem of global warming – by aiming to educate the public through the media (contrary to our rather irritating dengue advertisements) and global stars in which we can see, a better form of environmental propagation in place where the textbooks fail.
Security was rather tight as well with routine close patrols by uniformed policemen and women every 5 mins or so, with the coast guard always making their rounds round the bay area as well. 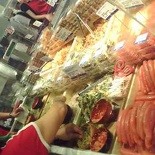 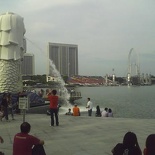 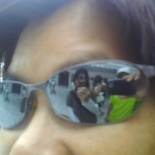 See through those glasses 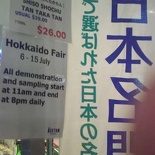 Hokkaido Fair at Tampines Mall
Popped by Tampines Mall for the rest of the night, namely because of the Hokkaido Japanese Food Fair (6-15 July organised by Isetan) in which Sheena wanted to visit. They have a whole assortment of Japanese delicacies, snacks, drinks and desserts. Noticeably in demand are the cream cakes and ice cream which seem to sell like hot cakes there, otherwise the warm sake is worth trying as it have a warm mellow flavor on top of a rather flowery taste.

Good buys are the imports from Japan itself, not to mention products which we can’d in our Supermarkets like their packed seaweed and unique handmade puffs, otherwise others like sushi, etc are just too common here to be considered special. The things sold there are not cheap either – $15 for 100g of salmon role and $12 for a mini bento set is a far cry from value, besides having them made by skilled Chefs from Hokkaido itself. 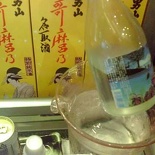 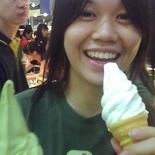 Metro at the nearby century Mall is having a closing down sale with everything going 50% off, together with the crowds at the Hokkaido Japanese Food Fair, it seems that most Singaporean are all veyr much unhindered by the GST increase. Brought 2 new firm pillows from the sale to replace my few flattened pillows at home.