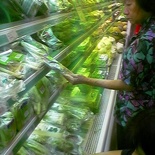 Had been sometime since I went out grocery shopping with my parents (its like 2 years or so, since I left the army) so why not join them over the week at our usual nearby neighborhood NTUC fairprice. Overall I have to comment on the rather pleasant shopping experience fairprice has offered over the years, even till now. Now they not only have an expanded selection of food & exotic varieties, they even have a dedicated electronics branch. Furthermore with recent renovations, improvements & such, the place is so much bigger now. Even the aisles are so much wider now, allowing trolleys to parked by the sides without obstructing anybody, (not to mention those trolley races when I was a kid!) to the extent on packaging improvements & expanded range of NTUC home brands too. Wow that is alot I’ve missed!

Taking on packaging, as educated citizens, we all know that plastic is bad for the environment, being non-biodegradable, its it will be like there even when we throw it away. Though people may think I am crazy (only in Singapore) but sometimes I do bring my own bag to hold my groceries, not to mention declining to at local provision shops & such. Over here its take it since its free, Singaporean style. 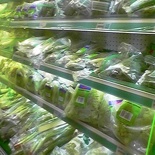 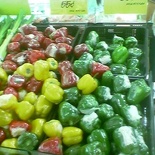 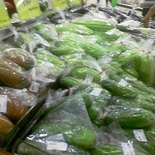 However, a trip to the greens section gave me a big head-shaker- everything is all plastic wrapped, where had all the traditional vege selections gone too? In place of classic weighing scales, baskets full of fresh mud filled rooted vegetables & the earthy smell of greens all replaced with synthetic, individually wrapped, vege packs with stickers showing its prices, weigh, etc… This is overboard, even the geen peppers are individually wrapped in plastic! argh! The humanity! Argh, the environment. If Fairprice thinks plastic is the way to go, maybe they should adhere to the bio-gegradbale ones, which I think such profit orientated companies won’t bother spending more money on.

Mmm, there is a new upcoming addition to the coke family, called the Coke’s Calorie. It claims to make you lose weight by increasing your body’s metabolism, in turn burning more calories (Burning Enviga) its slated for 2006 Debut, check out the news on yahoo