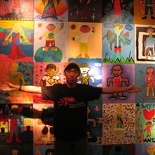 Colours of life, wall of heroes, school’s collaboration paintings – An exhibition by Ben Phua. Thats the highlight of the night, held at the AGF Theater this evening, the exhibition showcases various paintings done by hundreds of students from various schools in Singapore. The guest of honour for the event was Mr S R Nathan & Mrs Nathan. The event kicked off with a dance performance followed by various introductions & a speech by Ben himself. An artpiece, titled “I love the world peace” was presented to the president at the end of the performances as token of appreciation. The Art gallery was opened for public viewing shortly after, together with a short reception where snacks, champagne & red wine were served free flow. A phototaking session with the Mr & Mrs Nathan, the VIPs, together with students & teachers from the various schools followed thereafter. The event ended shortly after the phototaking session where the president sent his regards before leaving the event.

You can view the event photos here. 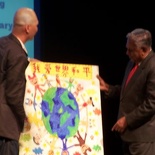 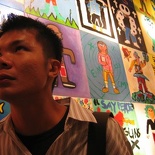 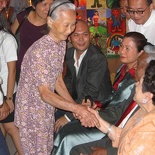 Overall the event was a success. On a sidenote, Ben is a close cousin of mine & we grew up together together with cousin Gordon, his younger brother. Partly because his mum used to badysit me & my sis while we were in primary school when my parents are working. We were a pesky bunch back then, always messing & sewing at his works of art while Ben’s still in Secondary school. I didn’t know my Cousin Ben had been so aggressive with his art, going full time into his art passion as an artist. Whoa! he have even those customised namecards with rats on them… neat.