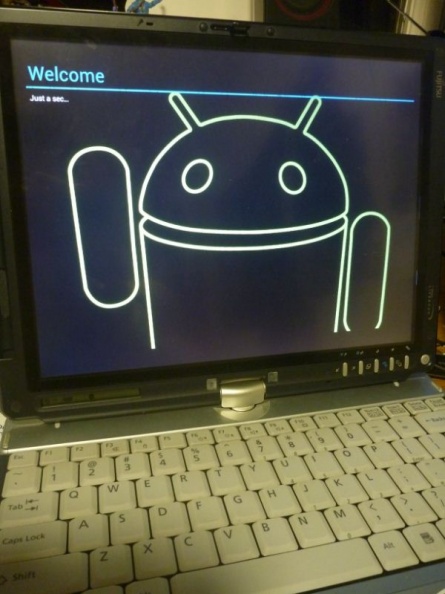 The idea of Windows 8 running on ARM based tablets is unreal, but the idea of running Android on x86 based PCs is even cooler. Knowing the crazed Android platform developer and supporter I am, what’s the least I can do than to get it running on my x86-based tablet PC?

You can start off by grabbing the Android x86 sourcecode and building the image yourself. You have a choice of Honeycomb or Ice cream sandwich (ICS) flavors. This is courtesy of the guys on the Android x86 project who made everyone’s job easier by porting much of the needed original source code for runtime in the unconventional PC-based architecture. So do check out the Android x86 project, go ahead and give the guys a visit and drop them a tip or two if you appreciate the work the team had been putting in developing Android for PC. If you are new to this, the main development site has specific .iso files for Asus netbooks (Eee PCs), Viewsonic viewpads and few MSI netbooks which is convenient if you have those devices. Otherwise, you are quite out of luck if you are intending to get ICS running properly on your own system, let be on any system like my ultra-old-and-dated 8 year old Intel 915GM-based Fujitsu tablet which nobody supports at all.

So that pretty much kept me busy over the last few days, working on the x86 instance of Android 4.0 for my laptop and streamlining various old drivers and re-building the installer with many trail and errors. It gets really rewarding eventually when you finally manage to get the build to work, bringing a whole new life to my stoneage tablet PC. 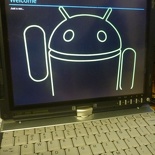 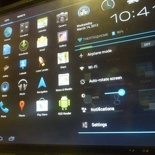 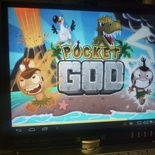 In a matter of no time, I was zipping through the app tray and testing out various functionalities of ICS. I have the default market installed which was promptly updated to Google Play through my intel a/b/g card via my compatible wireless drivers. I’ve got touch support using my wacom-penabled touchscreen and the hardware keyboard working. Strangely, the laptop trackpad was automatically recognized as an optical trackpad (similarly found on the Desire range of HTC phones), which allows swipe based navigations and scrolling, but no hardware mouse pointer like those you get by plugging in a human interface device via USB Host. Hardware limitations on my digitizer and synaptics trackpad prevents any form of multi-touch interactions, so I am pretty much out of luck for pinch-to-zoom on the browser/maps or any form of on-screen gamepad interactions where 2 or more multi-touch points are required.

My clunky tablet PC, though in the heavy weight league of 2kg is not exactly what you will find in a standard Android tablet these days and is not exactly what I call “one-handed” portable without breaking your wrists in the process. But it’s a form factor I never knew could be realized at all, let be on a nearly decade old tablet PC. Is it how the eventual tablet PC is supposed to be idealized as? Maybe.

Come to think about it, my tablet PC may be one of the few ICS machines on the planet which doesn’t go with Google specs for Android, especially with the lack of an on-board camera- the camera app crashes on runtime due to the lack of a webcam. The absence of an accelerometer means that automatic screen rotation is non-existent and have to be toggled via a manual screen rotation app on the notification bar. Currently, the mounting of any SD cards via the Tablet’s SD reader or any external USB mass storage devices have to be done manually through terminal (yea for root!). I was not able to get the integrated DVD-burner drive working too.

Games such as Pocket God runs well on the system only that the market seems to recognize my device as a tablet, but I believe is not exactly sure of my device type or fingerprint. So it seems to be blocking several mainstream games I’ve bought and free ones such as Angry Birds or Fruit Ninja. This could be rectified by updating my product.device and build.fingerprint to a known similar tablet device type or simply just physically transferring the game .apk files over. 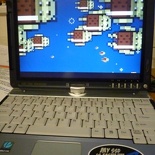 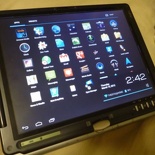 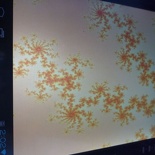 I was curious to find out the Quadrant scores on my unconventional system, but I wasn’t able to get Quadrant standard to run a full benchmark as presumably with the program freaking out and crashing after encountering my laptop’s GMA900 “GPU” (lawl) on the graphic testing portion of the benchmarking process.

I still yet have to test for extended battery life running ICS, but I reckon the increase in battery life will not be significant as processor don’t seem to throttle well between cycles, as felt with the system fan always abruptly speeding up and down presumably at 100% commit. I was not able to tweak the on-screen brightness too. Furthermore, my DVD drive goes into a random read-write cycle each time the screen goes off standby mode, it’s like as if you are booting the partition again each time to wake it, but then that’s how Android goes into standby anyway, so doing it on PC kinda counter-productive. Still, everything is still largely in the testing phase, so bugs are always evident, it’s always a work in progress!

In all, running ICS on my tablet will keep me busy with the ICS experience without the need of any emulation or SDKs for now, until I get a stable ICS build into my handphone at least. A poor student developer like me will have to suffice using an 8 year old 2kg laptop as an Android tablet until I can afford a proper Android tablet myself. Till then, happy Android x86-ing!