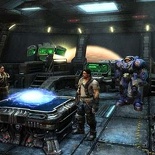 Here are some quick snippets of the BlizzCon 2007 held in Anaheim Convention Center in Los Angeles.

Few noticable annouvments include details on the new WOW expansion, World of Warcraft:Wrath of the Lich King with new large Ice worlds. Not to mention plans for a Warcraft Movie in the making (Computer Generated just like those in-game cinematics we all know of Blizzard).

Besides that the public have their questions answered by members of the different teams at Blizzard. At the World of Warcraft Items and Professions panel, the development team discussed their plans for the Inscription profession, on top of Starcraft 2, and DID we mention Starcraft 2 again? this time yes with another indepth walkthrough of orgasmic gameplay which I believe is worth more than the 10mins it can offer, more at the Play Button:

More details on the in game engine and Starcraft 2 Campaign Storyline, continuing from where Brood war left off (long read click “show more” to read):

Using the in-game engine, a cinematic rolled, panning across a yellow planet, through a window and into the bridge of the Battlecruiser Hyperion. On the bridge were Terran Vulture pilot Jim Raynor, star of the original StarCraft and StarCraft: Brood War campaigns, his second in command Matt Warner and marine Tychus Findlay, featured in the StarCraft II cinematic teaser.

The fully 3D bridge has a number of interactive areas on screen, allowing you to speak to other bridge and crew members, check out display panels for further information, or view the Star Map. More on that later.

Raynor, in command of the Hyperion, interacted with the ship’s crew, rubbing shoulders with a surly engineer, revealing one of the game’s subplots. It seems the crew hasn’t been paid in months, an issue Raynor says will be resolved once he’s collected the bounty on the Protoss artifact he recently recovered (presumably in the mission prior). Part of the campaign in StarCraft II will be focused on Raynor’s efforts to make money but taking jobs like this one, missions that ultimately tie into a larger plot.

As you earn money, those funds will be put into purchasing technology—upgrades for units and units themselves. Pardo purchased (read: unlocked) the Viking ship for his next mission. This has been done to give players control over the tech progression of the game, instead of following a locked down set of upgrades.

Hiking back up to the bridge, Raynor checks out the Star Map. This is where you’ll choose your missions. They’re much more open ended than in the previous StarCraft campaigns. You’ll be able to pick the planet or system you want to tackle next, progressing the story in your own way. Mission briefings provide the summary, objectives, bonus objectives, mission bounty, and recommended technology, so you’ll have to choose which best suits your current needs and matches your current level of tech.

Following a trip to Sar Mara, in which Pardo cheated, adding extra Thor mechs and Battlecruisers to his compliment to secure the next artifact, it was back to the Hyperion. And since Jim Raynor’s had a rough go of it lately, he heads down to the ships canteen, only to run into an old friend, Zeratul, who warns of something rather dire.

The single-player presentation ended there, promising a glimpse at the future of the storyline, including a return from the Queen of Blades, Kerrigan and hinting at unraveling the mystery of the Xel’Naga.

The free form, open ended progressive storyline planned for StarCraft II looks like it could be a refreshing change of pace for fans of the Blizzard RTS formula.