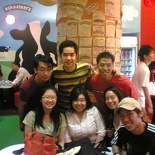 It’s time of the year again where my old SAJC classmate Geoffery comes by from Melbourne to Singapore for a visit. Well, he’s not exactly Australian if you are wondering, just an undergrad studying there, based largely in Singapore and Hongkong. Sunday was the intended day for the outing. But most of the gang couldn’t make it then, with reasons varying from school to work to even running a marathon… (duh), so why not Tuesday instead? What’s more Tuesday – that’s track training day, but evening rain and post marathon laziness urged me to take the rest of the day off and join the gang instead.

Took the MRT with classmate Desmond towards Outram as he’s heading the same way too, as he had to Ummm meet his mum at Chinatown. Interestingly the MRT entered my boarding station with a speed so slow, I guess if anybody where to jump on the tracks (no pun intended) they could be able to WHOA! stop in time. That prompted a rather interesting chat on the train on how Singaporeans should find more interesting way to kill themselves rather than being steamrolled by MRT trains, won’t be surprised if the authorities put up barriers doors on all MRT stations in time to come. Reached Vivocity at 6.30pm on the dot.

😯 Greeted a Geoffery carrying his assortment of ZARA and Topshop shopping bags – his way of Progress Package conversion and injection of it back into the economy. It was my 2nd time at Vivocity and astonishingly, despite Geoff’s 1 week of stay in Singapore so far, it’s his 4th visit to Vivocity, dwarfing my 2nd visit, Shup’s 3rd visit and YingXian’s Ummm 1st visit (she also got lost trying to find us there). Cheers to Geoff, Zongjie, YingXian, Julia, Jeremy and Shup to be able to make it at such short notice.

Choosing a place to eat is even more interesting though with options from “high class” Swensens (like Swensens standard menus but marked prices), “high class” Japanese restaurants (no buffet only al-lacarte bummer). If we ate at Sushi Tei, it would be Geoffery’s 3rd time in 3 days eating there, but he don’t mind, either. But the obvious lack of ATMs in the area and unjustifiable $17.90 for a plate of fish & chips at “high class” Swensens prompted a more affordable dinner at Fig and Olive, where everything is equal or slightly more than $10. For $13.90 I got a plate of BBQ chicken, vege & pasta.

😆 Just like me forking out $25 for beer after being late for the gathering 2 year’s ago, it’s Shup’s turn this year though. Yes she’s was late, being caught up with work, but no problem that means she got spending POWER unlike us broke students. And she wanted to treat our meals but we all insisted of paying anyway… $10 per person that is haha…. (damn we should have ate somewhere more expensive…) Desserts was at Ben & Jerry’s thereafter, justifying the fact that desserts can actually cost more than the price of your meal itself. The meeting this year was short but otherwise still enjoyable, not to mention cutting short the 30 MinutesTM farewell chat in the middle of nowhere. Shup had to work early tomorrow while Geoff would be heading to MOS, for me, it would be Home! and ZZzzzz, 11.30pm when I reached home, duh.

😉 Misc babberings:
They are everywhere! Saw 2 Marathon finishers in their Finisher Tees around Vivocity itself, and 1 on my 855 bus trip home! Man it’s a small world, or had SG got a boost of Marathon finishers since last Sunday? I thought they are quite hard to come by haha cus Marathoner’s are like Ummm only 0.2% of the population?

Despite Vivocity being Singapore’s biggest mall, it has indeed one fo the smallest and cramped gaming arcades ever. Man had E-zone went down in the dumps since the majestic outlet in Cineleisure Orchard. Seems that Zone-X is taking all the limelight now. Moreover, the arcade games there seem to be locked in time, with arcade games “new” 3-4 years ago, they do not even have 62″ of widescreen-plasma-zombie-blastin’ goodness of House of Dead 4 (wahhhh!) or even Time Crisis 3 (Only TC2) bummer!