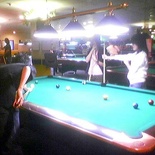 Today started as a lazy tried day. Didn’t expect to play pool after school. Recapping, think didn’t get much sleep yesterday or so, busy with work, play & things like that. No wonder I saw myself dozing off most of the time this morning in class during my first mechanics lesson of the day. The person sitting beside me Wenjun, always seemingly oblivious to my regular head whip lashes here & there though. I guess thats me without morning coffee… Eventually turned to myself to a dosage of Ricola sweets to keep my blood glucose saturated up till the next tutorial. Telling myself, man I must sleep the moment I reach home dude.

Lunch was at food court 4 again, this time with the girls joining us, the class seems always to be in pieces every breaktime, with few large groups here there & a few loners, some MIAs. Went to photocopy the class list I’ve been working on the past week, finally its done, with some errors… darn. Then the girls suggested going to play pool after school. haha you must be joking… I didn’t expressed much interest in going at first, partly as I haven’t played pool since god knows when dude! since I enlisted in the army? 2-3 years? Furthermore I can see myself sleeping on the table when I am there. But since its like so sad, like no one wanna go, so why not join in add to the numbers & cheer the group up abit? 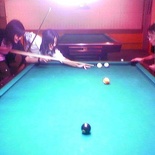 Strangely I was much more awake after lunch, we decided to stay for out last class before heading out. At our last class, our ThermoFluids tutor, Mr Low is on his 3rd shirt & pants for 3 weeks, yes don’t ask me, he changes his attire once a week… Furthermore he managed to beat his previous record in covering 3 pages of lecture today from the previous 1 page. His radius of attention is still sadly about 1-2m around him. So anyone who talks or falls asleep outside that radius is completely invisble to him. During the tutorial, my classmate Luke raised a question on the IDEAS module which sparked me to dig up an idea I thought this morning at breakfast- when I was one with bread, cakes & morning tea. I believe & I guess ideas can come out of nowhere or out of the blue.

Whats more I thought of a “rather innovative” hybird 17″ LCD monitor I think is not to hard to construct, with the exception of a prototype costing about $650 at least. After missing one bus & catching the other, only to unlight like miles away from our destination, we finally made out way to west coast recreational center for yea, pool! Played 2 rounds of 3v2, me being in the “2” but we won 2 out of the 2 pool matches we played anyway. Left early for home as I had yet to settle some unfinished army projects, leaving the guys to continue their 2v2 match on a table.