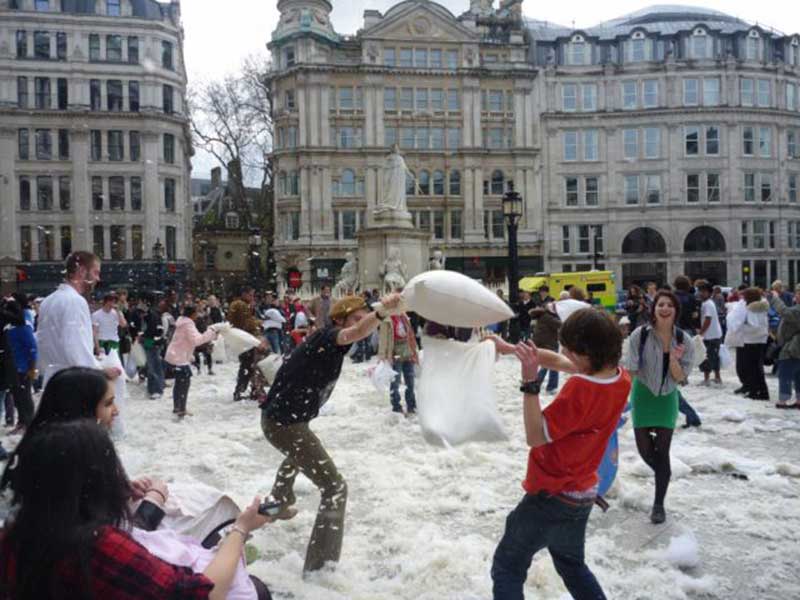 Was at the world pillow fight day last Saturday (3rd April) in London. The event is a free-for-all event with very simple rules of engagement- Get as many friends to come down the event and anybody with a pillow is a target. Man! it was chaotic but extremely fun at the same time. The event is part of a global phenomenal where fights going “bap bap bap bap” are conducted in all the major cities all over the world such as Paris and New York (You can view a photo collection of worldwide pillow fights from TIME here). The London one is held right in front of St Paul’s Cathedral smacked right in the middle of London Sightseeing and tourist district. 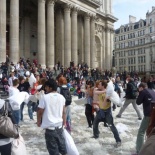 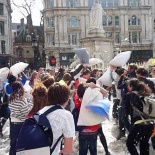 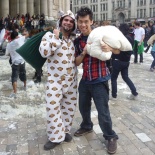 The event started out cleanly with most of everyone’s pillows sustaining most of the blows. It’s not until where it’s about 30minutes into the fight where everybody’s pillows started falling apart, showering the whole place in a sea of white feathers and other synthetic materials. And was the event the highlight of everyone passing by, tourists, passer-bys and people on buses all stared at us in disbelief on what’s happening in front of them. It was crazy, yes crazy, retarded you can put it, but most importantly, fun. 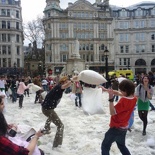 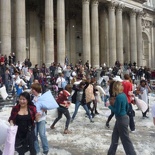 A pool of feathers 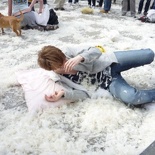 Whacked at the pillow fight

The fight was all orderly and well. It’s not long where the whole place become engulfed with white feathers, transforming the whole area into a scene indifferent to a white Christmas, or an asthmatic nightmare. Some even tried making snow ummm, feather angels in the pile. The paramedics were called in at one point in the fight, presumably with somebody having a concussion or something, but all’s well and the medics hung around the event for a while watching and smiling in disbelief of the carnage unfolding before them.

I was prepared and brought a helmet to the event, as well as some body armour. But I did not wear it until I saw the need for some serious moves. Then later do I know that it turned out to be a doubled edge sword- Wearing protection simply just screams: “HIT ME”- everyone will seems to be coming over to bap you with their pillow whenever you have additional shielding on. It’s like: “he’s protected and safe, everybody bap him!”. That’s where I found out that getting hit on the head with a soft pillow actually feels better than getting hit on the head with a helmet on, it was painful!

I remembered being all white almost like a chicken, I think to the extent of even returning home with feathers still stuck on me. That day at the event was part of a long day in London with several other events I’ve attended as well. Will be touching on my visit to the science museum on a separate blog post. For now, take care!