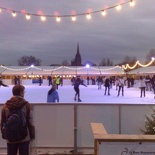 It’s important but not Urgent!
With term ended a week ago, had about a whiff of freedom and lots to procrastinate, well so as it had been now. I remembered dreading the long days in lectures and supervisions of the previous term, always hoping for some breather off so I can consolidate and get work on track. Then I discovered what weekends are best used for. Well, till I wished they were longer as well as I never had enough time to get backdated work done and they always just end up in a viscous cycle, piling up almost no end in sight. That had to stop, one day. Then suddenly comes this offset of freedom.

Just like the fun and lightness of the new ice skating fair ground on Parker’s piece, this holiday felt strange, a direct contrast so unreal- no nagging alarms, dragging myself to make breakfast everyday in the dark and cycling at break-neck speeds to the department in time for lectures hoping not getting hit by traffic along the way. Go figure, well that’s life of a typical Cambridge university student.

Come to think about it, I had not actually got anything academic done till date. Spent much of the early week getting chores and dated freelancing projects settled. At least that is all done with a load off my chest so I can focus. It had been sometime since I’ve trained my brain to work on a schedule and I guess it’s not too late to get myself onto a stringent routine. So school work is next.

Holiday plans
Oh yes, I will be staying over in Cambridge for much of the holidays, most people I know will be heading back home for Christmas, but that’s something I find unjustifiable, let be costly for just a short 6 week vacation. On the contrary, I will be spending Christmas over with Aunt Jenny’s- she’s an old family friend in Hampshire who invited me over to spend Christmas with her family. Went around hunting for some gifts in town after sending Christmas cards home at the post office. After much consultation for an appropriate gift, finally settled for a niffy box of chocolates and a bottle of wine for them.

Now all I have to do is decide on my mode of transport there. I am very much torn between choosing the coach or train to get to Farnborough through London. Initially, I wanted to take the train to King’s Cross and London Underground my way to Victoria station or Heathrow to catch a connecting coach to Hampshire, it’s being the fastest and cheapest solution. The underground is cool, but I’ve not actually seen much of London myself, and I don’t want to pride myself having traveled London, but only in the tunnels!

So yup, that will be the coach for me there and keeping my options open for the underground trip back, which may not be a bad idea after all- I will be spending the new year’s and the countdown in the heart of London thereafter. Yay!