Well, tonight (well technically, last night as it’s morning now) saw a visit to the Southern ridges park connector again, only that this time it’s held at night. So I was thinking hey why not have another visit to the place and possibility take some pictures of the place at night? It will be an interesting perspective in addition to the one I wrote about on my Southern Ridges Park connector article in the day.

Our small group of 6 started off at Harbour front MRT after a light dinner at Seah Inn Food Center. Eric was late, but watching him finish his chicken rice alone with everyone waiting/watching for him (and pinching food off this plate) was quite humorous by itself. We took the Marang trail up, by then it was already around 7pm + so it was getting dark- fast. Despite a fast 15 minutes slow climb, it was already night by the time we reached the top of Mount Faber. 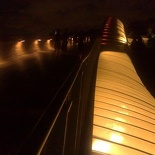 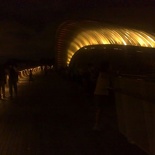 View of the Waves from MT Faber 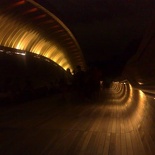 The Henderson waves looks very different in the night, it’s like set in it’s own mood with dim lights lit all along the walkway of the bridge, outside, the bridge have more prominent spot-lighting for visibility at long distances. A trail of orange lights illuminate the perimeter of the waves as it peaks the above the walkway (which also serves as shaded spots), which gives the area a cool orange glow but not too creepy compared to that of the many kids around there tonight holding candle-lit lanterns and walking around in the dark. Much stronger under-rail lighting lines the open edge of the bridge.

We carried on along Telok Blangah hill toward the Forest walk, as roughly expected, the forest walk resembles much a lighted platform of floating lights at night. You can make out the walkway running into the jungle at night in the distance by the lights which goes on for the whole length of the walk. 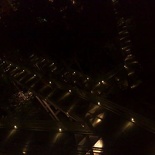 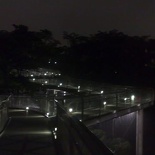 Then it started raining- heavy 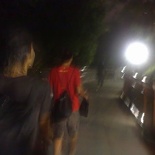 We were about 1/3 into the forest walk when it suddenly started raining- hard. It was like in the middle of no where as shelters are only located at both ends of the walk. So our walk turned much into a mad dash to the end. We were prepared to get wet anyway, and we anticipated the weather beforehand after the Henderson Waves bridge by packing all our belongings and placed them in waterproof bags. 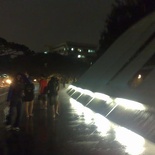 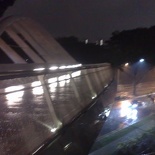 Another view of the Alexandra Arch 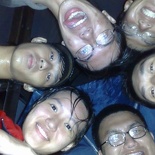 I always heard many tales from friends and acquaintances alike who visited the Henderson waves, let be the forest walk and got drenched /set back by the rain as well. It seems that this is fast becoming much of a trend, including my visit today. We waited for a while at the Depot Road shelter of the forest walk (which didn’t do much of a shelter anyway). When the rain started to lighten, we waded across the Alexandra Arch over to Hort park to wash up. It was too dark and rainy to give Hort park a visit, so we ended our planned journey here, minus the visit to Hort’s.

On a side note, being cold and hungry thereafter, supper was back later after a short trip back to Harbour front, where we discovered Jonathan’s Zhong Yuan inner-self, and yes, we more of less ate back all the calories we burnt over char kuay teow, mee goreng, roti-john, spring chicken just to name a few, things our track coach we scream at us for.

Cheers to Leslie, the organiser for tonight’s walk and Eric, Jonathan, Kaiyin, Xiaoqiang for making the walk tonight.

It’s late now, time to get some rest.