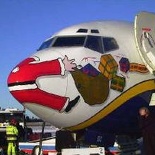 Christmas is hectic for all but particularly for Santa, who must live in Kyrgyzstan and make his rounds at lightning speed if he is to deliver gifts to all the world’s children on time, a Swedish consultancy has concluded.

Between Christmas Eve and Christmas Day, Santa Claus’s route around the planet includes stops at 2.5 billion homes, assuming that children of all religions receive a present from the jolly man in the red suit, Anders Larsson of the engineering consultancy Sweco told AFP.

“We estimated that there are 48 people per square kilometer (120 per square mile) on Earth, and 20 metres (66 feet) between each home. So if Santa leaves from Kyrgyzstan and travels against the Earth’s rotation he has 48 hours to deliver all the presents,” he said.

Father Christmas has long been believed to reside at the North Pole, although a number of northern towns, including Finnish Rovaniemi, claim to be his true home.

But Sweco’s report on Santa’s most efficient route — which takes into account factors like geographic density and the fewest detours — shows that he wouldn’t be able to make his round-the-world trip from there in time.

“He has 34 microseconds at each stop” to slide down the chimney, drop off the presents, nibble on his cookies and milk and hop back on his sleigh, Larsson said.

Santa’s reindeer must travel at a speed of 5,800 kilometers (3,604 miles) per second to make the trip on time.

Another report circulating on the Internet suggested however that Santa’s sleigh, weighed down with presents and travelling at supersonic speed, would encounter such massive air resistance that the entire contraption would burst into flames and be vaporised within 4.26 thousandths of a second.