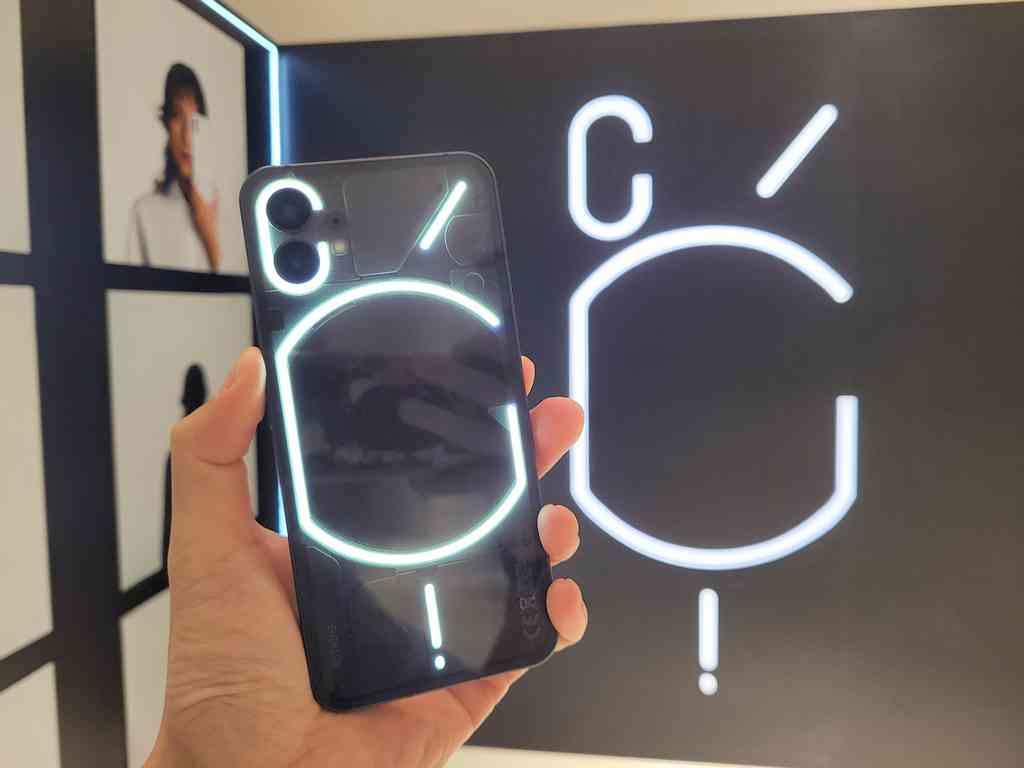 Nothing released their first mobile phone in Singapore with the Nothing Phone 1. Let’s take a first look at the brand’s first phone brought to you by the London-based company. In a nutshell, Nothing Technology Limited is a new company in the consumer device scene. They are backed by an impressive group of investor including GV, EQT ventures and private investors.

The biggest product release is the Nothing phone, which goes on sale in Singapore end this month. It goes along the line with the philosophy of less is more. This is seen through the simple design aesthetics and the simple operating system we shall look more in-depth.

Moreover, the Nothing Phone 1 is of a candy bar form factor- rectangle shaped with round corners (coincidentally). It is probably inspired by the Apple iPhone. Still, it is an effective tried-and-tested layout, and a poke into what is otherwise another iPhone wannabee clone. If courting existing iPhone users is the intent of Nothing, you can see where they are coming from on the design.

Also, this similarity is down to the arrangement of the dual camera sensors rear of the phone and buttons. The button profile of the phone is simple. It has a power button on the right, a volume rocket on the left. You get a microphone array which sits on the top. The phone is available in 2 colours, white and black and is IP53 – splash, water and dust resistant.

Speaking in the likes of Apple, one gripe is the features, or rather the lack of it. Consumers be disappointed on the omission of staple headphone jack and SD card slot typically found in low to mid-tier phones sold in emerging markets. Omitted too is an FM radio, a key feature of the mid-tier market phones. Also, in place of the headphone jack, Nothing advises the pairing with their wireless earbuds which you can purchased separately.

Additionally, the phone runs Nothing OS. Their current 1.1.0 version is a port of Android 12 (Snow Cone). This is tad synonymous to the Google Pixel line of phones of stock Android, with the lack of bloatware is touted as a selling point. The phone also comes with 4 years of security updates. It gives some reassurance of the longevity and commitment on Nothing’s part.

Having said, this rear face is a large piece of glass is held by adhesive around the border which seals access to the phone’s intricately designed rear panel. I particularly enjoyed being able to see the partial innards and detailed rear design with an assortment of access screws and various panels connected together. It is tad a nod of clear transparent casings of electronics back in the 90s.

The cool but gimmicky glyph pattern

Also, the light-up glyph pattern which illuminates up when the phone rings. The glyph lights are tied to specific tones. Also, the phone spots a range of factory ringtones each with its own glyph lights synchronized to the noise the phone makes. The rear LEDs also serves as the camera flash of the main camera on top of notifications, and displaying charging progress. I can see the phone probably useful in concerts or as a party talking point.

Still, with such a fragile rear glass, also, chances, most users would have the phone installed with a case. And unless you have a transparent case, chances you would hide the phones main selling point. 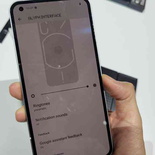 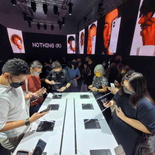 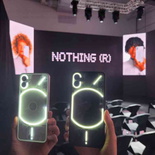 The phone is zippy and fast. It has a distinctive dot-matrix font theme which is refreshing and a throwback to retro tech. Coupled with the impressive 120hz refresh screen, it does give the stock Android experience we come to love in Google Furthermore, you can tell that Nothing phone 1 target market is from the mid-tier to high end market. In place of MediaTek Helio CPU found on most mid-tier phones, the Nothing phone 1 spots a Qualcomm Snapdragon processor. It is a mid-tier phone masquerading as an upper-tier one.

Still, specification wise, the phone CPU is one of the less impressive offerings. Under the hood spots a mid-tier snapdragon CPU which is more at times adequate for most of what you can expect of the phone. The phone spots a Qualcomm SM7325-AE Snapdragon CPU 778G+ 5G. It is built on Qualcomm’s 6 nanometer process.  The chipset spots an Octa-core CPU comprising of (1×2.5 GHz Cortex-A78 & 3×2.4 GHz Cortex-A78 & 4×1.8 GHz Cortex-A55) and an Adreno 642L GPU. Standard run-of-the-mil stuff you expect with these chipsets and nothing too fancy here.

Also, Nothing Phone 1 touts that the phone’s Snapdragon 700 series CPU had been customized with Qualcomm to include 15W wireless charging, and even 5W Power Delivery 3.0 reverse wireless charging for peripherals. Wireless charging is something not typically found on mid-range chips by design. To differentiate the offerings in the rather already crowded mid-tier segment dominated by the likes of incumbents Xiaomi, Vivo/OPPO, and even Google’s own S$749 Pixel 6a. Skeptics may argue that Nothing’s price point would put it more squarely to for a better flagship snapdragon 800 CPU.

Fueling this is a rather sizable 4500mAh non-removable Li-ion battery which Nothing claims does 18 hours of use. Also, it does 33W fast charging (Quick Charge 4.0). This allows you to charge the phone to 50% within 30min, and full within 70mins. Connectivity wise, the phone spots 5G support on top of LTE and 3G with dual Nano-SIM supporting dual stand-by. It also has support for WIFI 6 and Bluetooth 5.2.

The Nothing phone packs an impressive 50-megapixel main camera. It shoots at 24mm (wide) at f/1.9 via a 1/1.56″ sensor with optical image stabilisation. The second of the dual camera setup is also a 50 MP shooter, which does f/2.2 (114˚ field of view ultrawide) through a 1/2.76″ sensor. One LED circle around the dual camera module provides illumination.

The phone is a sharp shooter with the specs. However, the dual lens setup is nothing to scream home about and is typical in mid-range phones. It is great if for close tight shots in urban environments, but not so if you need optical zoom, or shooting nature scenes outdoors, where a telephoto works wonders.

I find the lack of a telephoto lens a let down, on what otherwise make the phone stand out as a versatile phone camera. Still, at least Nothing didn’t throw in a gimmicky depth or macro sensor found on lower-end phones. These actually does not does add considerable capabilities for its camera functions. Looking out at the competition, if Nothing were to introduce a third optical telephoto camera, say on their upper-speced variants (more on that later), the Nothing phone would serve as a very compelling and versatile camera setup.

For now, if you do require an additional 3x optical telephone lens, I would recommend the older Samsung S21 FE. It sits at a similar S$750 price point but packing a better Qualcomm SM8350 Snapdragon 888 5G CPU.

Nothing Phone 1 Price point and variants

The phone comes in three flavours in varying Internal flash storage and system RAM. The starting model (S$769) is not a slouch packing a respectable 128GB of storage with 8GB RAM. The next two variants both pack 256GB of internal storage, but with either 8GB (S$869) or 12GB (S$949) of RAM.

Moreover, all flash storage is non-removable, soldered-on and runs on the UFS 3.1 file system. Also, it is disappointing that the phone lacks a memory card slot. It is a nod in the direction in the likes of Apple and Samsung, which omits the MicroSD card slot in all their flagship phones.

Priced from S$769 retail, and by today’s sub-$1500 asking price for flagship Apple and Samsung phones, the Nothing phone sits in the upper end of the mid-range. Still, $800 for the basic phone is not affordable in any way. Gone are the days are flagship phones in the sub $800 range. This price bracket today is ruled by mostly mid-range phones costing from $400-500.

Wrapping up, the Nothing phone is fun as a talking point and novelty item and a lot of hype. Still I find it hard pressed to find a unique selling point. The glyph lights though cool does not cut it as a feature special enough to differentiate it is to other mid-tier offerings similar specs and better prices.

While you can applaud Nothing for trying to keep the offerings in the sub $800 range, it still does not compete well specification-wise to price which is dominated by Xiaomi and BBK phones such as Vivo. At least it is commendable that Nothing made the effort to package the phone in recyclable packaging and documenting carbon footprint information printed on the packaging. Pre-orders in Singapore for the Nothing phone 1 starts 5th Aug with the phone on sale in stores from 13th August.