As part of my university internship and industrial experience requirements, I spent the last summer back in Singapore working 8 weeks from the 26th of July to the 17th of September. I’ve got the opportunity to work on improving a large caliber weapons system currently actively employed in the Singapore Armed forces.

The organisation is no Stark industries, but with some of it’s bells and whistles as an acquisition defence agency almost like DARPA in the US or the DSTL in UK. A little background, the Defence Science and Technology Agency (DSTA) is a statutory board set up under the Ministry of Defence (MINDEF) in Singapore. It is responsible for implementing defence technology plans, acquiring defence material, engineering, innovation and developing defence infrastructure for MINDEF. 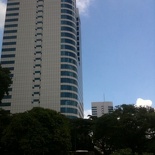 On a hind side, DSTA aims to provide leading-edge technological solutions to the Singapore Armed Forces (SAF). This is so that it continues to be a formidable fighting force for the defence and security of Singapore. This force multiplier are largely delivered through strategic purchases buys and integration of components. As we do not develop majority of our miltary hardware, most of the work here are project management and acquisition work.

Luckily I was tasked to work on sometime tad more tactical than just being buried in everyday paperwork. I did work under the Guided Weapon & Armament (GW&A) Competency Community under Systems Management. The security in the organisation is much more strict than most military intuitions I’ve been to, despite the fact with interns having one of the lower security clearance in the whole building. Working in a high security environment is definitely an eye opener for me, we deal with a greater deal of classified material, it’s unreal yet cool at the same time.

With an allocated mentor supervisor, I was given the role as a junior engineer, taking on the mini project of my own. Tasked a project to independently assess, work and suggest the most cost effective solution to improve and fulfill the night engagement capabilities of a locally developed weapon system. I am given the flexibility to manage the project directly, working autonomously and deliver the project findings with respect to project milestones and datelines.

There, I’ve given the opportunity to research and work with several interesting technologies and hardware to go with it, namely:

With the following engineering procedures I applied on my own in my analysis of my options and eventual result:

Extensive life cycle analysis, including product disposal were considered. It was concluded that a modular add-on to the weapons system will give the army the flexibility to operationally deploy a variety of night aids found in the SAF inventory, which is both cost efficient and easy to implement/deploy logistically and on the field for the soldier. The suggestion of the weapon enhancement does not stop here, with areas open for further improvement as well as noting future technological possibilities which can be used to further employed to enhance the solution in the future. Following my presentation to my superiors and department head on the last week of internship, the presentation feedback is largely positive with a good chance of the recommended solution being implemented in the Singapore army itself.

Disclaimer: Please mind the vagueness of this post, particularly the mention of any specific weapons system. There are just so much information I can share openly besides the obvious already on the public domain. Cheerios!