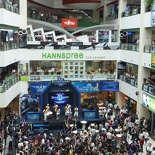 As what Tychus Findlay would say “Hell, it’s about time”. Yes indeed, with 12 years in the waiting since 1998, Starcraft 2 is finally released and in the hands of gamers as part of a 3 series story starting with the Terran campaign- “Wings of liberty”. The official launch party in Singapore was on today afternoon at atrium of Funan the digital lifestyle mall. Long queues snaking around the building can be seen right before noon today, with the first in line said to be camping in the mall for the last 48 hours.

I usually see great value in the games Blizzard publish, namely from their 3 flagship games and universes- Warcraft, Starcraft and Diablo, I am not really a fan of the Warcraft series, particularly getting hooked on World of warcraft, despite playing the series since WC2 and all their expansions. Besides Diablo too, Starcraft has always been a series which stood close to my heart during my growing up years, let be the endless multi-player sessions with friends right after school everyday via our 56kps dial-up modems. Those were indeed the days.

No stores in Funan were stocking the game as of yet today, with the launch party being the only exclusive source of the game today. Boxed versions of the game will be available in store tomorrow with or without additional freebies/goodies depending on the store you brought your game from. Had a chat with Brian Kindregan from Blizzard who was there for the launch as well, a nice chap who also had no problems with photos! 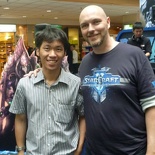 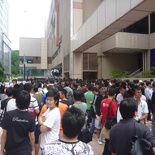 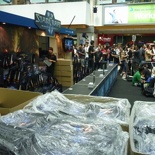 And we have boxes! & boxes

The thought of Starcraft 2 is indeed nostalgic, with thoughts of reliving the good old days in pure high definition glory or visuals. Graphics had definitely improved, though anyone familiar with the old Starcraft interface will be disappointed with nothing really new introduced in the game- mostly everything being a fancy repacked remake of what is currently existing with a few additional units. On the contrary, that was exactly what Blizzard had in mind too, so that old players can simply just jump right into the game and play it just like the old game, 2 sides of the story.

With Wings of liberty released, Blizzard was unable to comment on the launch of the boxes campaigns for the Zerg and Protoss campaigns as well, only time will tell where more information will be released in public. In the meantime, the next Blizzard game to put your crosshairs on next will be Diablo III.