Cambridge University Malaysia Singapore Association organized this event last Saturday, the 30th of January which is essential and asian food festival where the society gets to prepare unique Singaporean dishes for everyone to come and enjoy.

I’ve signed up as a helper for the food festival since early last term. So that very much grants me “free” entry to the event, which by itself costs £7 for members and £11 for non-members, not that actually was part of the agenda! I was rather clueless when I placed my name down to help. The day started out with some supervisions in the afternoon (yes I know it’s a bummer to have supervisions over the weekend). Little do I find myself prepared for the daunting task ahead to prepare dinner for well over a 100 guests. 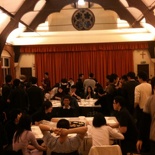 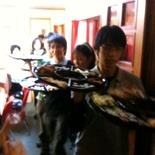 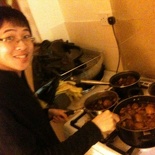 More cooking to do!

Nonetheless, that Saturday afternoon was spent preparing Chicken rice, as well as cooking all the chicken. Chicken rice is one of the main courses to be served for the event, which goes hand in hand with Pak choy (vegetables) with other local dishes such as Bak ku teh (pork rib spices soup), Loh bak (black sauce meat and eggs), as well as Laska. There were also appetizers, servings of the famous rose syrup bandung as well as bobochaha for desserts. I opened the place up in the late afternoon so that phase 2 of cooking can be done at the hall venue, where they have a kitchen which we can use too.

Besides cooking the rice and chicken, the hard part was myself doing most of the cooking for the vegetable dish, which easily saw me through over 25-30 packets of Pak choy and having to separate, wash and cook over 100 stalks of the vegetable. I guess that will keep me away from it for sometime. We did encounter quite problems ourselves too, such as being unable to reheat the rice, so it was quite a pain to serve all the guest cold food, particularly the rice. But I think everyone received that as OK, with no complains as I know of. 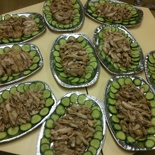 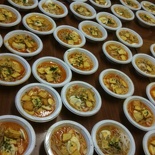 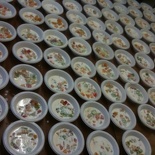 The event was a success, and the guests were all generally happy with the food from the feedback we get as servers. The same can’t be said for all of us though. Sadly, we ourselves as organizers literally have nothing to eat from mid afternoon onwards to late. It’s not until about 10pm where the guests start leaving where everyone started to have dinner.

Well not that we actually prepared dinner for ourselves, but rather savaging-ly dined with whatever food is left in the kitchen as well as those collected/cleared from the guest tables. Not that was bad, but hey at least we get to try what we cooked! We had enough food leftover for everyone (with excess to spare) mainly from the bulk of the leftovers from the last few dishes where many guests could not finish, coining out the term “serve the dishes you want to eat, last”. Much of the the leftovers were all meats and rice, not to mention some half eaten bobochaha, which wasn’t too much of my liking contrary to some who just slurpped them all. There were no left overs of the vegetables I’ve prepared too- they were all wiped clean!

Looking back at what we had prepared, that was really quite some feat we had pulled out, not to mention the number of bowls of food we all went into making for the all the guest. We have pretty much have each other to thank: the committee and the helpers for a job well done.