Last night was the DSTA scholarship awards ceremony 2008. The event saw the leaving graduates from the 2008 batch leaving this year as well as the prize presentation for the 2009/2010 batch of scholarship receivers and post graduates.

Held at Orchard hotel, the event saw a welcome address by Dr Tan Kim Siew, Permanent secretary and Chairman DSTA and DSO together with the keynote address by Mr Teo Chee Hean, Minister of Defense. There I received my scholarship scroll from Mr Teo followed by a stage phototaking session, performance and a dinner reception outside the main ballroom itself. 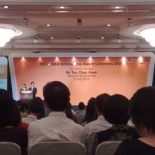 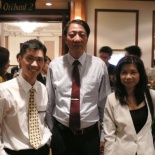 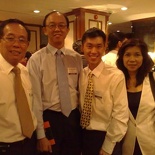 There I got to meet up with Tan Hang Cheong, SP principal, Soh Kong Pheng CEO of DSTA as well as Mr Teo Chee Hean for casual talk and discussions, particularly on plans ahead and education. There I got to meet up with the other 3 scholars from SP itself which brings the total number of scholars from Singapore Polytechnic to 4 in total, far more than any other Polytechnics in Singapore had got.

Everybody was in the light of the mood for the occasion and congrats, and a great sense of achievement constantly filled the air around us. All is very promising road ahead of us scholars as scientists and engineers in the defense science community.

The reception ended around 9pm, with Mr Teo making his move around that time, overall the event was a big success I can see, the food was good and there was enough to always constantly go around for everybody. Will be looking forward to my farewell ceremony next year, when I leave for abroad in my studies.