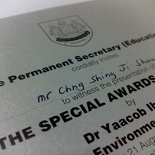 Got an unexpected item in the mail, it’s an invitation from our permanent secretary, Dr Yaacob Ibrahim to the 2008 special awards. As naive as I was, I had to google to update myself on what the special awards is for now, as it was a never widely known or publicized event, or one that I never thought myself being able to actually attend and witness.

The special awards had not changed much from what I thought it to be- it is a prestigious event held for the top students from all the institutions in Singapore, particularly also for the recipients of the Lee Kuan Yew awards and those receiving the “All rounder awards” as well. I am honored to be able to attend it and accepted the invitation. I will be looking forward to the ceremony coming late August.