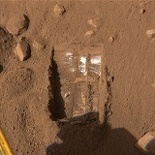 Greetings from Mars and they come in peace! In the search for habitable regions on the Mars’ north pole region, the Phoenix lander had began digging into the area to sprout some interesting finds, clumps of white stuff. These were discovered in shallow trenches excavated by the lander’s backhoe-like robotic arm have turned up specks and at times even stripes of mysterious white material mixed in with the clumpy, reddish dirt. For the last three weeks scientists had been trying to find out what that mysterious substance is.

Led by the University of Arizona and managed by NASA’s Jet Propulsion Laboratory. Phoenix (built by Lockheed Martin Corp) landed in the Martian arctic plains on May 25 on a three-month, $420 million mission to study whether the polar environment could be favorable for primitive life to emerge. The lander’s main job is to dig into an ice layer believed to exist a few inches from the surface. It had merged two previously dug trenches over the weekend into a single pit measuring a little over a foot long and 3 inches deep. The new trench was excavated at the edge of a polygon-shaped pattern in the ground that may have been formed by the seasonal melting of underground ice.

It’s no surprise man looking to find ways to live out of his home planet, such bits of information are just the baby steps to conquering the outer regions of the universe. And we believe Sergey Brin’s 2011 space tourist flight had nothing to do to it.

“We think it’s ice. But again, until we can see it disappear … we’re not guaranteed yet,” mission scientist Ray Arvidson of Washington University in St. Louis.

New photos showed the exposed bright substance present only in the top part of the trench, suggesting it’s not uniform throughout the excavation site. Phoenix will take images of the trench dubbed “Dodo-Goldilocks” over the next few days to record any changes. If it’s ice, scientists expect it to sublimate or go from solid to gas, bypassing the liquid stage when exposed to the sun because of the planet’s frigid temperatures and low atmospheric pressure.

Even if it’s not ice, the discovery of salt would also be significant because it’s normally formed when water evaporates in the soil.

Preliminary results from a bake-and-sniff experiment at low temperatures failed to turn up any trace of water or ice in the scoopful of soil that was delivered to the lander’s test oven last week. Scientists planned to heat the soil again this week to up to 1,800 degrees, said William Boynton of the University of Arizona in Tucson.

Now get those vacuum Ph meters out already!

Update: Confirmed, those white stuff are Hydro-oxygen based atomic particles (and impurities) held together with van der Waals forces, arranged in a regular solid crystal lattice (otherwise known as water past freezing). This is proved after further observation and sublimation of the “ice” with the Marian atmosphere.