Been all round Singapore and visiting grans in the afternoon. The rain kinda dampened the need to drop by Chinatown to check out the festive happenings and goodies there. Then there was the Track and field outing in the evening.

It was a short dinner gathering at Hongkong Street cafe at East coast with most of the track team there. There were beach side games earlier in the afternoon which I wasn’t able to make. But otherwise was told it was put short due to the rain in the area (Not to mention the jams all round the marine parade area which made me late as well too). 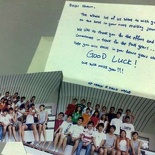 Had their trademark Chicken and Pork shop curry rice, topped with some dim sum for a modest $14, got to catch up with my juniors and alumni members such as Ronald who is in the internet telephony mlm business. The gathering also saw a reunion of some long lost seniors where most of us going “MIA” since the hectic final year project period.

As with every track and field tradition, each senior is presented with an intricately hand-made card personalized to the given impression and milestones we had contributed. It’s also interesting to see how who are portrayed from the eyes of our juniors.

Just to name a few of the rather interesting drawings, Zhongyan our jumper also like to drink and chomp on other people’s food especially after race lunches, thus he’s drawn running who refreshments at the finish as a bait, Weiwen was drawn as a gorilla given his “on the surface I look like I will kill you look” & Shunqiang, being named Xiaoqiang was drawn a cockroach. 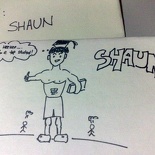 I was drawn as shown on the left, quite accurate I would say, haha if that means standing way ahead of everybody for the ummmm, “top student” part, but thats some defined 6 packs I’ve got there haha!

We all made our way and gathered round the marine parade community club top floor basketball court to chill out interact with out juniors, with each senior taking turns wishing and sending their regards to the juniors before bidding officially farewell to all.

We have the especially the organisers to thank for this event. Though it’s a simple event with no fancy BBQs and stuffs, it did get the intention and objective through- to officially send off the seniors in a cohesive and memorable way.