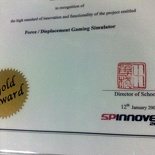 Was around school today (for one of the few last times) with the team to collect my Spinnovex gold certificate. There was alot to catch up not to mention bidding farewell to many of our anticipative lecturers (not to mention many photos as well) who took us during our course of studies. I apologize for my absence over the last week as the period spanning from last Tuesday to Thursday as that was my class end-semester chalet period. Nevertheless, managed to find some time to get an entry for the event up:

Less than satisfying BBQ
The first day started with a simple check in and setting up the place for everybody. Contrary to shopping and preparing food ourselves, our organisers ordered catered BBQ for dinner, which was rather a big the disappointment as the BBQ wholesale center with catered food is not only expensive (about $120 for one night) but only offered enough food for the labeled “20 people”. The spread only encompassed a a single tray of beehoon, few satays, hotdogs, crabsticks, fishballs and rice balls which can’t even feed us all fully at all. I did not interfere with the organsing this time round but from my own experience of organising and going through countless BBQs, $120 for food brought by yourself and prepared by yourself can even feed 20 people for 2 consecutive nights of BBQ, but I was a guest haha… so relax bah!

Fret not as there was more food!
Thankfully, there was our classmate Ryan to the rescue with his connections and having worked in a fast food outlet in Downtown east itself, we managed to get a large abundance of (yet guilty-ly) fast food leftovers later that night (enough to feed an entire army) all sent to our chalet unit itself, where most of us pigged out over supper and playing cards and playstation console games. 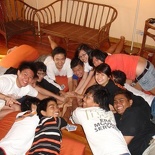 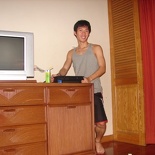 And few PS2s to boot! 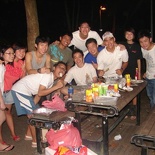 Waterbomb teamgames
Field games, especially ‘monkey’ and waterbombs were played during the whole our the following afternoon to pass the time, with the bomb fight ending with lots of wet and bruises bodies, not to mention sun burn taking the biggest toll among most of us there. There was team based “capture the ball” almost like paintball using some built up sheds and tables for cover, otherwise there was the “free for all” bomb fight to end the afternoon with. Dinner was the same fast food together before calling the night with more late night card games, outdoor walks and not to mention disgusting forfeits. 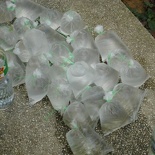 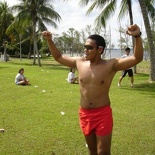 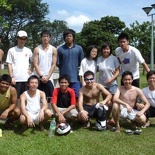 We definably could not get enough of the MacDonald’s $2 breakfast meal for the morning where we checked out. Though the chalet was not totally the well-organised and that aside it definitely satisfied it’s objective as a closing event organised to celebrate the end of the semester and Spinnovex. And man do I have to run more to rid all those excess calories taken in from the fast food!