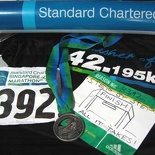 RACE REPORT
You’ve finished, we see a Winner! As anticipative as I was last night trying to sleep at 10pm, the next moment it’s already time to wake up at 4:15am. Left the house at 4:50am for hawker breakfast. Disappointingly, most breakfast stores, though open had not started selling yet (I remembered eating there at an earlier time before… funny).

Dad gave me a lift to the padang where I nimbly headed to the baggage deposit with thoughts of the challenges lying ahead – This year, I will complete the whole marathon without unnessecarily & deliberately stopping to walk, with a target timing below 5hours. Baggage deposit was rather breezy & fast, with scarily helpful marshals everywhere. They will even help you attach your tags on with cable ties when you hadn’t done so. Heard they are paid like $10.50/hr but I thought they are volunteers? Mmm not sure of the myth anyway. Visited the toilet, did a full warmup & entered the sub 5hour pen ready for the race. The race ahead of me. 3-2-1 Go, my race had begun:

The race started smoothly, crossing the start line about 4mins guntime. Amazingly there was no conjestion after crossing the start (unlike NBRR 2006). Keep to my planned slow steady pace averaging 7mins/km, which is between my target maximum (6.30/km) and minimum (7.30/km) pace. All set and good for a long memorable journey and challenges ahead.

Interestingly, alots of runners can be seen suddenly running off in the bushes for “you know what” guess it’s all the pre-race bladder anxiety or pre-race hydration. Indeed, you are supposed to be so hydrated before a race that, to the extent that you are not deep into the race to secret them all as sweat as you still have to visit the toilet. Guess that what happend to be as well, visited the mobile toilet at the second water point around 4.5km and continued thereafter.

The Kenyan runners are already making their return from marina bay just when I was barely 2km into the marina area. Had some early try of deep heat at the 6km mark, but guess I got too much deep heat than I asked for (the rep there just squeeze a whole tube into my hand.. wahhaha). The anti blister measures I’ve taken paid off quite well, too well infact – about the 5km mark, excess tape on my left foot started to cut into my adjacent toes, prompting me for on-the-race-removals. Saw Huida & Weiwen on their 10km while leaving the Marina area. Met some SGrunners on the return loop.

Interesting notables was a Catwomen Runner with a heart shaped sign sticking out like a flag behind her, a Spiderman running with a mask so loose, you know it isn’t Peter Parker. The most most commendable, was a lady marathoner running for an environmental cause – dragging a tire tied behind her with tin cans jingling behind. Saw them on my return trip from Marina.

Met the 5:30 marathon pacers at the 14km mark and overtook them shortly after. The sun rose as I left marina and chugged into Raffles place back towards the esplanade (8am).

The first 21km was still largely managable bringing me along the nichol highway, past the outdoor stadium and fort road into east coast park where I overtook the 5:00 marathon pacers. 22km is also the point where slight traces of muscle fatigue started kicking in. It is also the point where powergels are distributed.. yea! I gobbled up my first powergel at the 23km mark, only to discover I have nothing to wash it down till 1km+ later where the next water point is – that was the most sticky 1.5km.

Around 26km, disaster struck– the tape on my last right toe came off and it started blistering. Kept on for about 1km till I could hold no more but to stop and perform another pitstop at the Eastcoast chalets. This time wrapping the whole toe with spare duct tape I stashed in my “race repair kit”. I thought my race will be ruined into a limping walk after the pain kept on for about 200m thereafter to the extent of even clenching my toes while running just to keep the pain off. Then it suddenly the pain disappeared, allowing me to pick up my pace and lost time.

One main thing I love the Singapore Marathon over other races throughout the year is the support we get. There were alot of supporters along the park route: from officials with drums & trumpets & dressed performers. Unoffical supporters includes families offering watermelons, biscuits or cookies along the route to runners, while the rest just cheered on with cards and slap sticks.

The lagoon loop is one of the most scenic views of the route. Met one of my fellow camp officers walking on the return loop past jumbo seafood at the lagoon area. But didn’t managed to say hi as I did not want to break my running momentum uphill. Suprised to see him running the marathon though.

29km NIPPLE ABRASION! whahah. Stopped by the SGrunners 30km mark (9:30am) for some chat, deep heating spray and man do they have cookies! But dang they do not have any masking tape which I could use for the next 12km. What the best way against nipple abrasions? Tape them up! opps!

Leaving the 30km support point, it’s back into this part of the battle where most runnners would say: “the part where the marathon actually starts” yes indeed. it’s the most mental part of the race, it’s like stuck between a satisfying 70% completion, yet still still so far away from the finish. It is also the last powergel station which this time, I learnt to hold the gel till the next waterpoint in sight (where I could consume it easily with water), which is 1km away. The organisers should strategically distribute powergels directly before waterpoints.

This part of the race is a no-brainer for me, the objective is to not have too much things on your mind to bog you down, just maintain a clear mind and just keep going forward. The thoughts walking this stretch are simply overwheling and just keeps haunting you, there are many who kept on, yet even more who succumbed to walking. Before I know it, Eastcoast park was behind me and it’s back onto the rough tarmac of Fort road, where astonishingly, the tire lady is heading towards east coast park on the opposite side MARATHON ROUTE with 2 other support marathoners around her aiding in pulling her tire. A veteran runner in front of me simply just shook his head upon seeing that… “people now?.. haiz!” maybe? Interestingly, even after the tire lady ran past me, there are still marathon runners at distance behind her! wow she’s strong wahahaha!

Then after people’s association, mild salt cramps came on my right quads prompting emergency roadside stretching and lowering pacings a little, 3km later, the cramp is gone. Alot of runners can be seen stretching along the sides of the road too, before the 38km mark. Guess I am not the only one down with cramps. Time to pick up the pace again.

My rule for this stretch is “walk only at the waterpoint- when drinking”. My walking limit is 30m after a waterpoint, then it’s back into running towards the next. Keeping to this rule allowed me to run forward with a goal in mind- the next waterpoint, allowing me to cover painful 1.5km by 1.5km with a sound but strong mind.

(10:10am). Keeping to the same strategy with regular deep heating, pulled through this stretch ending with a long slight incline past the golden mile/beach road complex leading towards Nichol highway and eventually into the shady confines of Marina Promenade park. Swissotel hotel is already insight, the battle would be ending soon. “Fought so far now give it all you’ve got!” It feels just like AHM 2005 revisited again.

This is it, there is no turning back now. Had my last drink at the 40km mark and it’s all just run-run full throttle all the way with what energy I’ve left, resulting in quite an impressive overtaking spree leading all the way to the Esplanade area. Just before that infront of Ritz-Carlton Past, saw a runner who collasped on the ground – he was lying down on off center the path in pain. Wanted to help him but there are already 2 runners tending to him. It’s presumably a salt calf cramp on his right leg. So I just pushed on on myself and hope that I do not cause an obstruction myself (10:37am).

What makes this stretch so interesting is that everybody’s speeding up as well, so it can be said to be one of the fastest parts of the race as a whole. Averaged about 6-6.30/km for this last burst. First under the esplanade bridge and round the padang… 42km!! marker and the finishing line in sight! – moment to behold Crossed the finishline with a guntime of 4:48 & about 4:43 on my watch. Threw my arms up in the air, it’s all over whoa!

Baggage collection was a breeze with 4mins elapsed from the time I start queuing till I recieved my own baggage (with 5 people in front of me). Not bad, it feels just like this year’s AHM collection (still holding the record for 2mins). The thing I noticed this year when leaving the runner’s exit tent is the lack of the “See you again next year” banner at the end, so as it was last year. Considering SC is considering is already their 5th year as Singapore Marathon title sponsor/organiser, will this be their last year?

Some misc. bodily stats on my Oregon Scientific GR101A:

RECOVERY
Amazingly, unlike my first half marathon last year, I can still walk around with ease and perfrom cool down stretches. I can even do a cool down jog if need be, having only one blister on my feet. Physically besides very sore feet, muscular endurance is still there, not to mention fast recovery. Guess I have to own it to not only my anti-blister duct tape measures but the 20km leisure runs prior to the event as well. We propose not to train intensively next week, but rather go for recovery runs and swims in campus. Sounds good.