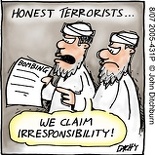 My classmate JB today found a plastic file folder in the library when using the free access computers. Later do he showed us the contents of his find – Lecture pad, Singapore River Raft 2007 donation card and misc. homework inside – No tell tale sign of it’s owner.

Initially we thought of returning the folder to the MM office as there is no other owner info, also it’s the best way for “cannot be bothered people” like us to return finds. Furthermore, the lost of a donation card will lead to a police matter which is something very shitty for it’s owner of course. Later do we know, ahha the owner is smart enough to put a copy of his timetable in the folder, the owner went by a name of Seah something.. something… Matthew, an EEE student. And after my last class at 3pm today, he would be at T15XX. And that is where we went after…

We kinda disrupted their class by knocking and going midway. But the class was simply stunned when the folder was actually returned and the lecturer there just couldn’t stop thanking and appraising the kind gesture, “he thanked us like siao” as KM said. I guess it’s very rare case in SP where we can see such kind gestures in practice or even happening, and I am glad we returned it.

Well honesty is the best policy after all, I guess the feeling then was more rewarding than anything, almost priceless.

Well not till after returning it, and when we had to dig our pockets then JB said: “shit, was there money in the River Raft Donaton Card?”