Just woke up at around 5pm after sleeping the whole afternoon upon reaching home, of course definately after lunch, a nice warm bath. Found time to blog, amazingly recovery is very fast this year no more sore feet & wobbly legs now, can even jog & jump about. Unlike the aches last year lasting even 2 days after raceday, I think my skin getting thicker too…

💡 Pre-Race
Had dinner the night before with the Plowman family at Kenny Rogers Marine Cove, East coast. Had their half chicken & ribs platter with side servings of marconi & cheese, long beans & mashed potatos, good carbo. The catch is that we stayed & chatted after dinner, then went for a walk along east coast park before calling it a night (11.30pm). Then my parents had to fetch them home before picking Sheena & me thereafter. Slept at around 12.40am so technically only had about 3 1/2 hours of sleep before waking up at 4am again.

Breakfast was at a hawker center opposite bras basah, beside Apollo hotel. Parked around the arts hertitage building area & walked there for some mee sua soup & teh-o.

Reached the padang with annoucements of the race starting in 5mins. & the race actually flagged out after I deposited my baggage. Baggage collection was unlike last year, no dark 5-tonners & was actually good this year. I was expecting a tonner dump again this year thou, coming with baggage tag already attached & choosing the brightest & most outstanding orange colored bag for spotting. Till they told to put my bag in plastic bag (presumably to prevent lost or tempering of belongings) which caused a minor hassle to reattach the tag, credits going to the helpers there who helped in re-attaching my tag too, yea good.

Did a rush warm-up & stretch, intending to warm up on the run. The esplanade bridge was actually clear when I was there, competitive had been flagged off. & non-competitive gathering unlike the packed bridge last year. Nevertheless flagging off with the bulk of the crowd didn’t prove too good either as it’s too packed to speed up. The race had started… 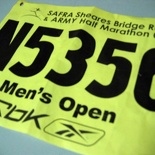 Pacing is very hindered this year, the first 4km was the worst spotting 6.30min/km pacing even with mindless weaving & cutting in and out of the crowds, still can’t speed up to my optimum 5min/km pace. Just too crowded as one lane is closed most of the route, like running squeezing through a funnel. Finished at a disappointing yet satisfying 2:08, inclusive of my toilet break, waits at all the traffic lights & after removing my champion chip at the finish, so actual timing may actually be lesser, but off my aim of at least 1:50mins. The widest & best over taking part has to be east coast park area & nichol highway area though.

Saw SGrunner sotong around mid-race & kept up with the tower before having to answer big nature calls at a petrol kiosk (guess with so much comments on shitting in pants thing over last week’s NBRR). Never do I know can see him again at outram MRT, talking to tiwazz who had problem with cramps. Too bad it was too packed jog over & say hi, I passed & overtook the group. Jonathan bumped into me before outram around riverside hotel.

Talking about toilet break having cleared my bowels the night before & right before the race, I never see myself coming to an urge halfway through the run. Maybe its the crazy toilet crowds at the east coast area which brought that to mind, together with the very bowel inducing motions running can give to your body. Held to my guns till past fort road where I couldn’t hold & detoured to a SPC petrol kiosk, greeted by a very friendly uncle who pointed the direction to the kiosk’s toilet upon approaching him, it was clear & even had Toilet Paper! Saved! It was a quickie, just like F1 pitstops, left the cubical only to be greated by a long queue of runners waiting in line, whew!

6Div water point seems to be the nicest, the one along nichol highway, with tribal fire theming, water, cheers & spray points. I guess the only things I have against this year’s event are the ultra small marker signboards, the need to STOP at almost every traffic light!, esp at the bugis, SMU & cantoment area. Irritating! Moreover, at some water points, you have to open the Isotonic drink packs instead of them being race friendly, so didn’t touch any isotonic drinks this year at all. Where GATORADE this year!?? 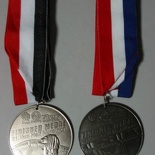 The true efficiency of the baggage collection shines after the race, after a long time too! Beside a wide use of post-it notes, my bag actually took 2mins to arrive & we get to keep our tags at the end too. Commended about that to the bag depositers who were rather pleased with their job too. There isn’t much of a queue when I was there too & even if so, was fast moving. Thumbs up!

Met Darius & Jonathon at the war memorial where we rested stretched & hydrated. Milo was nice & cold too, courtesy of few Milo Trucks. & I have the luxury to camp there for freeflow before the truck is turned upside down by the 6km & 10km crowds thereafter.

It rained halfway throughout the 6 & 10km races, therefore no no SGrunners phototaking. The rain proved much to my parent’s dismay who caught the rain mid-race too & wet parking coupons. Goodie bag queues were freakin’ long, lucky competitive already collected ours at the race-expo.

Met up with the rest of the track team under the esplanade bridge hearing tales of being the last of the competitive runners & the herd of non-competitive runners treating to engulf them alive. Also heard of runner shitting tales, drip & medical tentage tales courtesy of Weijian. Interesting. Those who also ran & were there: Darius, Huida, Weiwen, Yiying, Shunqiang, KC, Yuan, Zhongyuan & Alec.

Medals this year looks cheaper then that of last year (doesn’t have the nice dark faces as shown) but still same solid. Registered for Swissotel Vertical Marathon 06 at the padang booths, beats mail-in & fax registration ($29 early bird price, $39 usual), Trackmate Alex won’t be running for it this year though considering since last Suntec Vertical Marathon this year, but as usual Ahlong is going.

Shaun - Saturday, August 14, 2021
Linksys is a household name ambitious with consumer networking devices. Today we shall take a look at the Linksys 5G router. Interestingly, the router...

Shaun - Saturday, October 23, 2021
Ridout recently came on the news that its anchor resident, McDonalds Queensway is shutting down after over 2 decades in operation there. That caught...