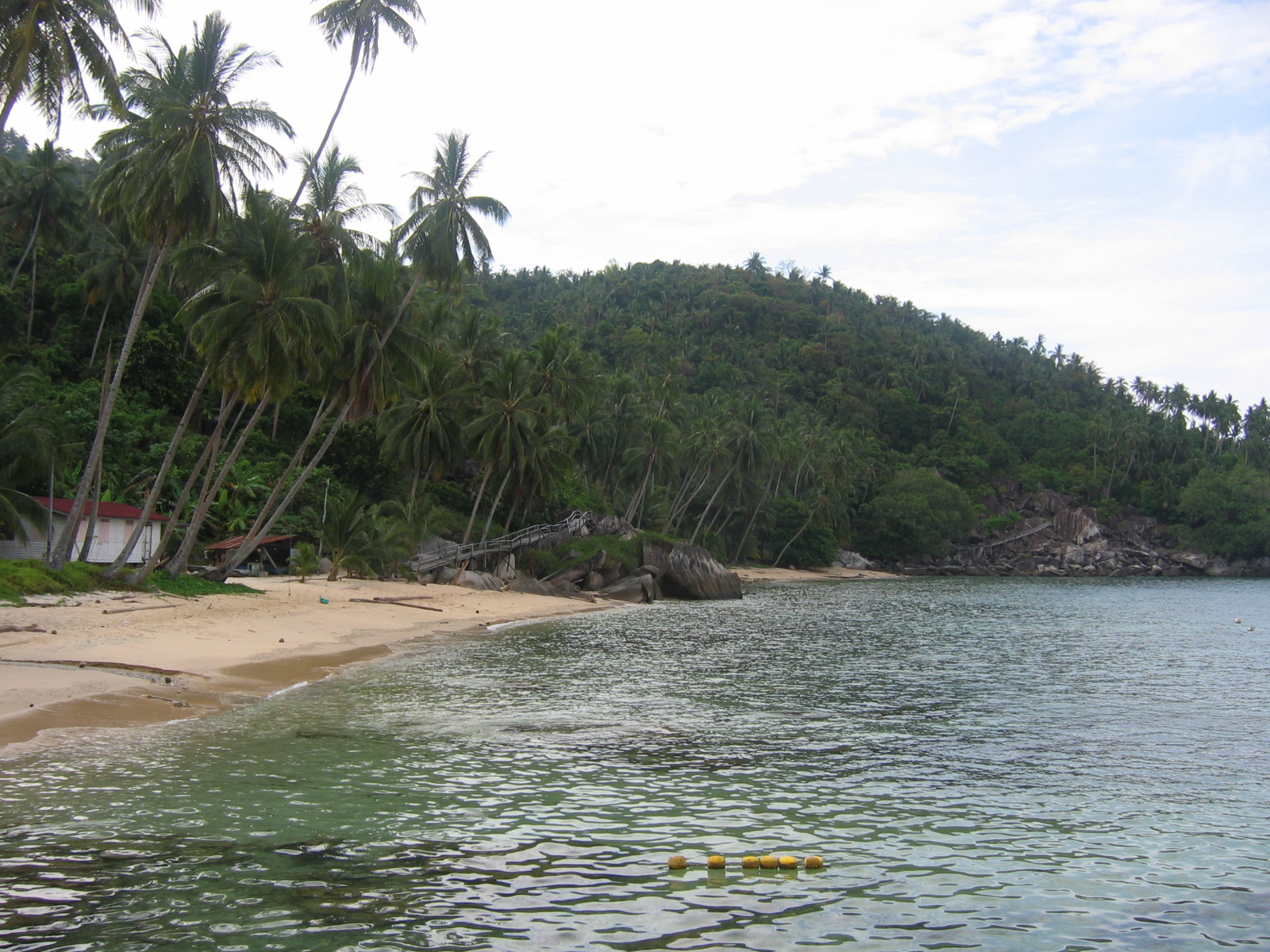 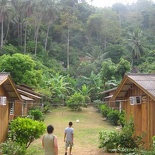 Holiday update (Trip photo gallery)
Ok heres quite a big update covering my weekend trip to Pulau Aur, click on the “show more” at the end of this post to read the full log of the holiday.

17th Mar Friday, the trip to Aur
The last & final part of the NAUI Scuba Diver certification is to clock in 5 open water dives before earning our SEA CARD. & what other better way to earn it than to do it with style int he clear waters of Pulau Aur, Malaysia. The gang met up with the Director of Leeway sub-aquatics, Mr George Lee at Transview Golf & Country Club in the evening, 7pm where we made on our way up to Mersing in 2 Minivans. Customs & clearing were smooth, with the exception of having a short delay to fill up the white arrival/departure cards at the woodlands checkpoint. We stopped over at Tanjong Leman Dinner for dinner/supper, where we got to try their local Mee Goreng, not to mention their teh-tarik & otak as well. From there we get to know our instructors better, particularly the training director of Leeway sub-aquatics & NAUI full SCUBA instructor, Uncle Edwin. Not to mention the group we befriend from other scuba diving classes as well.

Arrived at Mersing at around 12.20am on Saturday morning where we boarded BlueWater 1, our ferry on a 4 hour trip to Pulau Aur itself, where we too, spend most of the night sleeping. Upon reaching Aur at 3.30am, we were greeted with a need to climb a large wooden ladder by the side of the jetty, with our lugguage! Man, its was interesting at first, esp watching all the girls staring at the barnacle infested ladder in fear only to look down & epp! at the dark moon-reflected water below them. Interesting experience. Leeway’s very own diving resort is at Kampung Sebukang, otherwise known as the underwater adventure resort. We drew out keys to our little accomodation huts (amazingly they even have aircon installed) where we spent the rest of the night.

18th Mar Saturday dives
The aircon generator was down, so we all slept with only the swivelling fan on, but it was already cold enough there at night, not to mention no mosquitoes at all, so an air-con is really not a nesscessity. The village central bell woke us up at 9am, a rather primitive but effective method I guess which didn’t really work for my buddy Ridzwan though, (a good poke by the sides always does the trick anyway) later do we know that we are the last few to have breakfast… dammit! But we were fast, I caught up with the rest of the class in time for the 1st dive briefing by Uncle George. 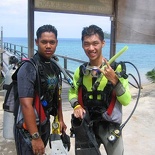 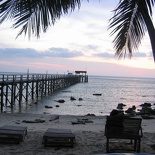 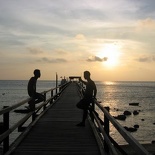 A sight to behold

We did our first few morning Scuba dives by shore entry & exit, we made our way to a deep enough area to practice the basic mask clearing, air sharing, hand signals & regulator retrieval. A warm-up as you can say. Mid-day saw us doing open water skin diving where we get to do tuck dives & underwater swims with only snorkels & fins. It where also got to experience in blasting our sea-water filled snorkels. Not to mention the spectacular giant stride entry which always yields rather interesting results in some people. I earned the nickname “dolphin” having able to dive even to the challenging 5m depths & surface calmly at a single breath, neato…

Skin Diving thoughts
As our instructor Uncle George says, a good skin diver makes a good scuba diver, but not vice-versa. The thing with makes a good scuba diver is the skill of skin diving, where the basics can only be master & perfected as a scuba diver & not to be all dependent on the compressed air tank to survive. Not to mention able to survive & thread water for up to 20mins at a go for ocean survival skills training.

Scuba Diving thoughts
Now that is where the fun begins, things are really different underwater. You also get to see more of things underwater, its a world on its own. Even no matter how menacing rock faces or corals look like in documentaries, the fear & feeling is definitely unreal & different from a personal experience. 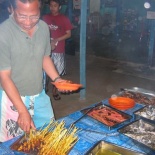 Ending Saturday
After filling out out diver’s log book, saturday evening was when we got to appreciate the sunset on the Aur island from Kampung Sebukang, the night ended with a sumptuous seafood BBQ dinner courtesy of the locals. Interestingly, coconut husks were used to light the charcoal fire. The BBQ food do taste different from our normal homeland BBQ, maybe it be due to a different type of charcoal, but otherwise still a yummy dinner with large assortment of squid, fish, satay, not to mention usual BBQ items such as hotdogs & chicken wings, all topped with free flow of beehoon, cucumbers & onions. Just when we thought the night’s ended we later found ourselves on the jetty searching for night marine life with out torch lights, hoping to catch the “fireflies of the night”. Our dinky scuba diving torches were drafted by Uncle George’s pistol grip rechargable underwater spotlight, which I guess not only disorientated fishes into thinking its day, but us too when you spin the light beam in circles on the water. We chatted & enjoyed a night of cool wind, smooth crashing waves in the background, a clear horizon, not to mention a sky full of stars, a sight to behold.

19th Mar Interesting Sunday morning dive
This is the day where everyone have to wake up early at 6.45am to set off on the dive boat to Pulau Lang for the first league of the series of morning dives. This dive proved to be the most interesting firstly with Ridzwan who left my diving regulator on the Jetty. I guess being the IC, pushing & helping everyone get onboard & ready for the dive, I even forgot to account for my own equipment, which I actually told my buddy to help account, but latter do I get to learn of his forgetfulness. Which left me stuck & disappointed on the boat unable to dive on the second day. Later do I know that one of the lady divers was quite off with sea sickness after the boat brief & returned back on board the ship. My eyes instantly lit up asking whether can I use her regulator, she replied a sickly yes, next thing I was off on a backflip off the boat into the sea @ 50ft with my underwater camera to catch up with the rest of the group. I met up with the group who was still having a hard time equalising on the 50ft descent, I overtook everyone & went straight down to the sea bed where my instructors are without the aid of the descend rope. Impressive, but later do I know that murphy law will strike again.

Being so caught up to join the group, I didn’t secure my air tank! which came off at 50ft, 2 times. Later do I know, I was calmly ejecting air from my BC & removing it similarly in the ditch/don BC exercise, only to sit down on the seabed with the regulator still in my mouth & securing it back on with the aid of another leisure master diver who dove with us as a group. We did compass navigation exercises & met up with another dive group who were doing life buoy exercises. We ended the morning dive with buddy rescue practices before doing a deep ascend & boat exit using a 30m trail line. 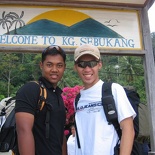 Leaving Pular Aur
Our last dive of the day saw ourselves making a boat entry near the jetty, where we get to explore the edges of the coral reefs before the “sudden drop”. I made this entry with my newly learnt forward boat roll. This is where we get to see the large rock & coral formations, not to mention a large number of sea cucumbers & large schools of fishes in the vicinity, another sight to behold. The last dive ended around 11am where we hurriedly packed our stuffs (our hut’s aircon was running when we came back, they had the generator fixed & running abit too late thou) & ready to depart.

Its paradise as you call it, relatively disconnected to civilisation, surviving on self generated power, with only basic TV & Radio, no handphone networks, no Wi-fi, no stands $5 Starbucks coffee . The village have a very isolated but yet homely ambience, with just plain old home cooking & accommodation by the rather friendly & approachable native villagers & did I mention they were all very prompt & very good at making home cooked meals for all of us. Never once a meal was late & meals are always waiting for us after a long hard day of diving, rather impressive I say. What else can we ask for? 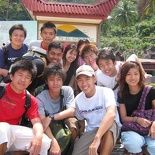 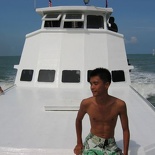 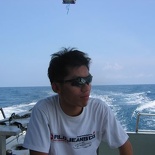 In Ending
We left Aur at around 11.30am on a 3 hour return trip back to Mersing. Packed lunch was onboard as well. During the journey we found ourselves all over the boat, from the aft playing cards, to the starboard mimicking stances in “Titanic”. We touched down on solid ground around 3.30pm where our second 2 hour league of the return journey begins on van. Thankfully we managed to avoid the Sunday school holiday returning crowd by about 2 hours by reaching the causeway by 6pm (Sunday school holiday jams usually starts 8-9pm). Shared a cab home with KZ from Transview Country club as he is also staying around my area, reaching home around 7.30pm, to my parents astonishment, was very early, they were expecting to pick me up at around 9pm to 12 midnight that night! & yes Dinner was heartily prepared by mum, but I guess I was too tried to actually comprehend & external stimuli that night.

Scuba diving is one of the things I want to do in life besides sky diving & bungee jumping as well other notable crazies during this trip are “finger fights” with parrot fishes underwater & Scuba diving to touch a stationary ship’s propeller & rudder. Overall, this trip is also my first personal independently planned trip, from the start to the end. No intervention or planning from my parents whatsoever, I just starting to love the free & easy travel, contrary to my parent’s liking of tour group trips (thou they are leaning towards backpacking these days too). I guess I will end this blog rather lenghty update with a small token of thanks to the instructors of Leeway sub-aquatics, not to mention my instructor Mr George Lee for the wonderful trip, lessons & event planning. All for us qualified Scuba divers as part of the NAUI family.

Last but not least don’t forget the Trip photo gallery!