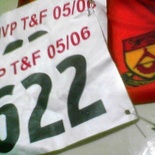 Completed the 10000m event today in 47mins, way off my target of 40mins, maybe because its a rather mental event having to run 25 rounds round the standard 400m track. The last runner finished in +7mins & man did the whole grandstand cheered on for him Though this is a 10th position timing, its a good exposure for me as a 1st time on the competitive IVP field (so as coach wanted it to be). Furthermore, I get the “bragging/picking rights” after beating Pohfong, my track & field senior’s timing of 54mins in last year’s 10000m IVP. Bwwrhahaha evil me! On top of the 2 events today (other being the 3000m womens), SP also bagged a gold medal from our pole vaulters. I guess today’s competition is a true reflection of sportsmanship, not only by competitors but from the individual runners themselves. Living by the olympic creed, let me take sometime to admire it again:

Would be burning in my new Asics DS-Trainer XI tomorrow with a 5km run around SP, in turn retiring my old DS-Trainer 7 as a competition & training shoe with a mileage of 800km.

I’ve never stepped into the deep areas of NYP before but dude it is indeed at very nice place, there is even a 20m fountain at the entrance, a very professional campus layout, not to mention a very integrated design. They even have CCTV screens at lift landings feeding live feed from cameras in the lifts? Funny…. Only they don’t have air-conditioned foodcourts (that of I know of). I guess we can’t demand much for nice infrastructure in SP, considering it a price to pay for being the oldest polytechnic, with very segmented blocks added over & linked over the years. Unlike a planned integrated one NYP has.