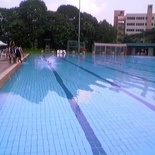 This was old news last saturday, but didn’t find time to update the site due to a small fever coming out since last friday. Yes I ran a triathlon on the 27th Nov with a FEVER hahaha, slight though & came in the 10 top too. A mini one though: 200m swim, 6000m bike followed by a 2400m run. May it be in 34mins total for me, slow for the tops, but the fastest in my group. My timing could be faster if it won’t for the Bikes provided by the SP cycling club, which gear shifters can’t even go beyond GEAR 3! So its like you can’t go any faster on the downhill, pedal & you are just kicking air & won’t go any faster! darn! If not I could easily be up in the top 5 or even 3!

Its organised by the Singapore Triathlon Family, aka trifam together with SP, in SP. Track practice was on the whole morning too, where they cheered us on as well, very motivational. The thing about exercising when you are sick is that you can’t really feel the fever or so when you are in the heat, only when you are cool & rested, guess so as your body temperature is significantly higher on the run. Popped in self-medication of paracetamol thereafter, wishing that I will be well in this for the Singapore Marathon.