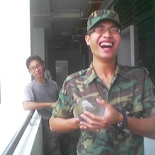 I’ve always wanted to type in a entry closing my period served in the army with a concluding post of my time there. Finally found the time to get this done.

Overall, alot of people always enter the army feeling down of tough times ahead & so. But personally, the army is actually not as bad as it is thought to be by many, including me. I expected super ultra training the moment I stepped into BMT. But instead, training is rather managable, way below the “super ultra training I’ve expected” You can say I was “happy disappointed” as I was actually prepared for a “hell week” or such. As the SAF practice progressive training, yes training actually gets harder as you progress, but so as your fitness so its a very smooth transition to greater intensity training & before you know it you can run 1/2 marathon non-stop, take part in relays or easily get 10mins+- for a 2.4km run. Things I’ve never thought I could do before I’ve enlisted. Further training went on to prep me for my military profession which includes 40-60km foot topographic missions in full battle order, back-to-back reconnaissance missions lasting one full week (allowing us to effectively lose about 3-5kg at the end of the day.. whee!).

It is also in the army where we cultivate habits we never thought any civilized person out there would do like sitting, flopping or lying on the dirt to relax, bashing through forests without hesitation, eat, sleep or do our business in the jungle, despite being sweat soaked to the underwear & beyond, with camo all over. Even in the dirtiest, stinkiest sweatiest conditions, we can just fall asleep instantly in the wilderness on command, its a way of life- army life.

Though many asked me about staying/signing on in the army, maybe I would only even consider if I am an officer, where pay is a very attractive thing. Otherwise as a specialist, I find not point besides able to earn approx $2.1k basic starting pay with free medical & food provided, not to mention for a trooper. Furthermore my area of expertise & comparative advantage in terms of skills I can contribute to society lies outside the barbed-wire laid fences of the army. Such as the market for designing & engineering where more opportunities & challenges lie.

Recalling my relatively short 2years 4mths in the army, heres a quite detailed list I’ve compiled on my service to the nation. Memories, memories…

“Check below link for a complete list of my personal memorable events, achievements & stuffs in the army.

Thats all folks! Bye SAF! Take care everyone in the army, train safely!