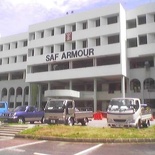 Today is just supposed to be a simple day- a short SPICE lesson at SP from 1.30pm to 4.30pm, thats all. Sold off my today’s WOS duty, so theres no reason to be in camp today, despite NOT being on leave (though I intend to use my off today). But it turned out to a day unlike any other… haha… woke up at 10am for my “planned” breakfast then lunch within the hour before school. But HECK NO! in turn theres tons of SMSes & missed calls from my dinky platoon commander 2Lt Chen Junming… disturbing my breakfast of tranquility. umm I guess he being the only slow poke in the wing now, he’ve got nothing else to do but only to sit in the office & chase people back to camp when they are not on leave- given his “sense of authority”… which he never earned from us anyway. Everybody hates him, it’s so including other officers for not what he is, but who he is. Even our troopers have some anti-Chen association headed by PS Eddy.. haha interesting.

Luckily I was smart enough not to answer any of his calls, so its fun time- PLOTTING TIME. As what I remembered what my old PC, LTA Poh said: “everything in the army is all about Wayang”. (Wayang i.e “acting”) So this means I got to show my face in camp! Umm if not I could be charged with AWOL! ahahahah fat hope…

But its 11.30am.. umm so how can I get to camp in the fastest time possible? Mmm CAR.. need a CAR! But dad’s car is at work. After a few mouths off mum’s special mee soup, jumped into the shower turned on, then turned off the faucet, got my stuffs & headed downstairs for a cab to dad’s workplace around noon. Armed with nothing much then a T-shirt on my back, surf shorts, slippers, my poly school bag & my camp bag. Then its a mad dash to camp! CRAZY TAXI! whee! Thankfully, dad got the car parked & waiting outside his workplace. Then its 110KPH NORM on the AYE/PIE to camp. whizz! Touched my camp bunk door at 12.30pm. Whee! Innocently (without socks & gutters) ran to ATC to get somemore ORD clearance signatures (at the same time making myself sweaty & tried to meet Chen to show face later) WOW ULTI-WAYANG! haha what a dork he is, its so easy to talk him out of things, convincing him that I was in camp at 8.30am & at ATC whole day collecting clearance signatures. Which “I did“.. really! 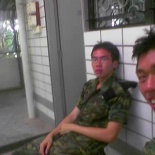 With the matter resolved & my “face shown”. Met Jeremy at the barber who’s on his PS course already. Sat down & chatted whilt, I guess this would be the last few times I would meet my fellow wingmates. As eager as I want to leave the army, comes the gloominess of leaving our friends & such at camp. haiz, life must move on. Left the camp to SP speedily around 1.30pm after my haircut & spending all my remaining credits at the E-mart. Its my 1st time driving to SP too, but I topo-ed my way quite easily to the T22 block using the orientation booklet’s campus map, I am a scout anyway! topography is in our blood.

Though I was late for 1.30 class (2pm), I didn’t missed much. Went home after the lesson, which ended at 3.30pm – early. Then the idiotic chen started calling again… When I didn’t answer his calls, he started THREATENING ME of “things happening if I don’t respond/reply” UH oh trouble!

So, the heavy artillery, he called. My TURN! (heheh evil genius). Went around calling my fellow “sources” in camp on his whereabouts today, so I can plan a “Chen movement chart” so it is:

With that I can tell him where I am at various times of the day “in camp” without “meeting him!” All collected from comfort of my evil Lair.. umm HQ.. umm Room I mean… Coupled with some advice/suggestions here & there on handling the matter for my evil plan too. Now.. I can’t call him as my phone battery is dead right? I just have to wait for him to call me again. Ring Ring at bout 6.30pm!

Again Shaun scores! the dinky mind of chen is easily brain-washed. As the saying goes, high-emotions comes low-intelligence, & emotional he was.. haha how shall I put it… ANGRY? The general rule is to keep on politely & subliminally insulting & mocking him on the phone while at the same time sound guilty at the receiving & giving him authority to make him “feel big”. It turned out he just wanted me to sign out the AHM donation card in the end. *COLLASPED TO GROUND LAUGHING AFTER HANGING UP PHONE!*

And how can I forget dad? Picked him up from work thereafter, otherwise he stranded with no car! Furthermore I don’t have to pay for this tank of gas! (though he didn’t see me flooring it most of today). *grins*

😈 I admit, this is definitely a negative demonstration. But at least we don’t get to do this everyday, so why not make the most out of it? evil me…