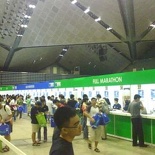 Collected my Standard Chartered Marathon (SCM) race pack today, as usual for every year, collection is fast and a breeze, hardly took 10mins to collect my bag which included custom items such as my race bib + champion chip and singlet of my size choice in as well. Just like every year, I collected my pack without any race confirmation, just my IC, haha works every time, I can see mostly only the new runners going with the hassle of printing the race confirmation slips with them. For those who know the system, well it’s had always been free and easy!

The queues for the pasta party and the shuttle bus tickets took a little while longer with only one counter allocated for it, but that took about another 10 minutes nevertheless. I am going for the shuttle service this year (4.30am at delta sports complex if ya runners wanna meet up) as I did not wanted to trouble my dad, also I personally find it dangerous to drive after running a marathon- won’t be as sharp to do so, anyway the best way to go back after a marathon is being chauffeured, either on a taxi or on a bus! 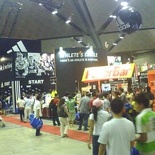 For those who find the need to allocate a whole exhibition hall for race pack collection a waste of space (just as last year), I could say “maybe” I mean despite my third year collecting the race pack I never even saw any queues at all, it’s like the the 20-30 tier snaking queue lines were never utilized at all, despite being on a peak crowded Saturday weekend afternoon.

Sports Expo at Suntec
The sports expo is always held concurrently with the SCM racepack collection, (or the other way round as most would think). There’s and even dose of footwear, indoor rock climbing and court games, not to mention inline skating and hockey tournaments. Me tup with few SGrunners there who are pacing this year’s marathon, lol they got to be there like 3.30am-4am long before any shuttle bus service, pity them. Chatted with few of the Polar Electro staff there, they have their new SX725 triathlon watch on showcase, strangely, despite being an update of the 625, it’s still using the S1 footpod and not the newer S3, so the old technology is still better? figures 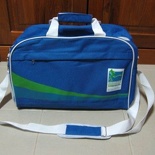 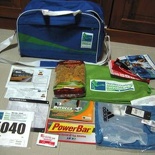 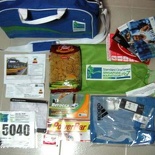 In the this year’s SCM race pack we have, in a nutshell:

Would be looking forward to my medal and Adidas Finisher tee when I complete the marathon!

Wishing all runners the best in your race next week!