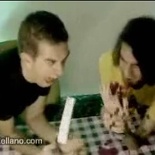 Nintendo Rufflu-lution!
Strange, theres nothing on the Nintendo Revolution in Singapore, due to be launched this japan year in answer to Sony’s PS3 & the Xbox 360. Even the 2 Nintendo booths at the Suntec IT show had nothing much on the lineup except demos on the SP & New DS Lite.

Haha, now the funny part. Recall one of my older blog entries talking about the upcoming nintendo revolution the previous year?

Showcased then was the official trailer/advertisement aired on the Japanese airwaves depicting the very much anticipated unit itself. Which is too, very very much different from the all so over-hyped xbox 360 & PS 3 in terms of the gyroscopic-enabled game controllers the revolution employs. Not to mention the variety of interesting gameplay possibilities Nintendo can employ with the new controller. hehe Judo anyone?

Been surfing around & came across a comdey-fied version of the official advert, of course a home video re-filmed one, in answer to the official Japanese advert’s very hilarious video. (Note you can’t download the video, you can only view it off a flash movie stream off the site through google video).