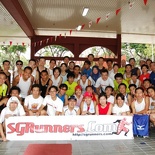 The Mizuno Mt Faber race was this morning, I did not run the event but based on feedback and word of mouth together with my own observations, the race went on very well and as satisfying as last year’s race, with few improvements here and there. There were very much fewer runners this year too, presumably form the boycott from last year’s Wave run- the roads are all relatively clear for all runners which brings about a rather nice “closed” run feel very much to that of smaller X-country runs like the Wings Athletics ones in Macritchie reservoir.

You also definitely can’t miss the call from the MC for all SGrunners to fall in for a photo taking at the end of the runs and look at the group! Will update more later.

Area’s for improvement for next year:

Recommended run next year- Yes of course, don’t think of this race like the Wave run, it’s very different.