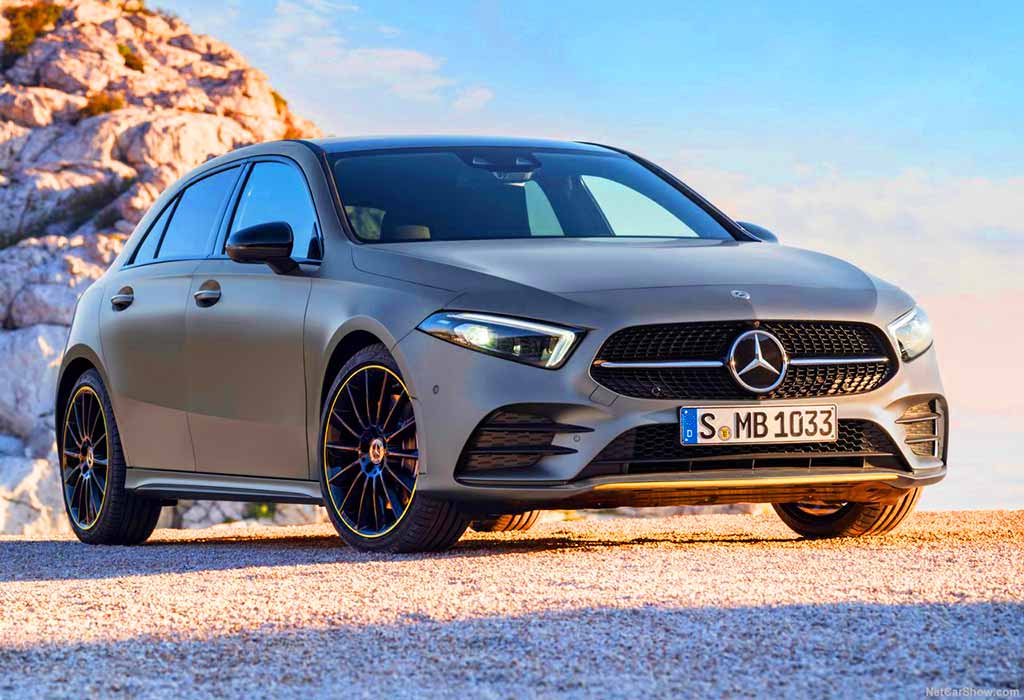 The new Mercedes 2019 A-class is a car plenty to be excited about. It is a completely new model built from the ground up and loaded with plenty of cutting-edge tech.

The sub-compact car market is one of the biggest selling segment for Mercedes. Mercedes in the recent years begun to market their brand towards young working professional. This involving shedding their brand image as cars driven only by owners experiencing a mid-life crisis. Henceforth, the new A-class, like the previous CLA, is targeted at this entry-level luxury car segment.

Notably, the rise of the middle-class is a force to be reckoned with. This fast growing market group, especially in China comprises mostly of young working professionals. This is particularly those in the 30 age group who wish to own a highly desirable brand, but without the baggage and the stigma of it.

Moreover, in urban Singapore, small zippy compact cars are the best fit for the roads here. This is particularly true for handling, as well as start stop city traffic.

The new A-class is a new will go head to head with the incumbents in the class of small hatchbacks. Notably, the array of competing cars in this segment includes the BMW 1-series and the Audi A3. The latter is similarly available as a sportback and sedan.

Buyers in this segment look for practicalities and build of a Volkswagen Golf- the industry benchmark of the segment, but demand a little extra luxuries to pamper themselves with.

Bigger exterior all round

Notably, the A-class had been on the market since 1997. However, the compact car bears very little resemblance to what it was first conceived as the baby Mercedes. Everything in this 4th generation are all up-sized. This includes the overall length and width. Moreover, the 2,729mm wheelbase had been extended by 300mm. Hence, overall length was increased by 120mm. This also adds to the occupancy comfort, particularly rear leg-room.

The front of the new A-class is and possibly one of the most aggressive you can find in the small compact hatchback segment. As with Mercedes harmonised styling ideology, you get a single daytime running headlamp LED bar on the A-class. This is also similarly found on the C-class. Moreover, this differentiates the lineup between the E-class and S-class with 2 and 3 headlamp LED bar strips respectively.

Additionally, you can option for the LED Multi-beam headlights on the A-class. Each headlamp has 18 individually actuated LEDs which has automatic glare reduction and seeks corners on a bend. These features however, have limited use on bright Singapore roads, unless you drive to Malaysia often.

The rear also sports dual exhaust tips, a rare item in this segment. This keeps to the same design philosophy that Mercedes is adopting across their line of cars. However, these “exhaust tips” are actually fake and plastic. The actual exhaust is actually located just behind the rear bumper. We can expect this exterior design design statement and front will be carried onto the upcoming CLA as well the new GLA.

The rear of the car see a radical design change too. The previous generation has issues loading large objects such as bicycle and luggage given protruding rear headlamps. Now, the rear lamps are now split between the body and boot lid. This does not eat into entry point of the trunk as in the previous model. Hence, this makes loading and unloading rather large objects from the rear considerably much livable, practical (and more “Golf-like”) with a larger boot entrance.

Additionally, rear boot space and access had been greatly improved now. The rear seats comes with a with a 40/60 folding split as standard, with the option for 40/20/40 split. The 40/60 option is more than adequate for most.

The real biggest change happens in the interior. The interior built and materials used is typical of what you can expect of a luxury brand. Moreover, you get soft touch materials on most parts of the interior. Mercedes has taken the best part of the S-class and installed them in the A-class. Simply put, the A-class is pretty much a baby S-class.

This is evident in the interior. The multi-function steering wheel is lifted straight off the S-class. This is also true for the Active Distance Assist Distronic, which includes the Active Steering Assist. It operates between 0- 210km/hr. Furthermore, you may recognize the dashboard and infotainment screens from the E-class. We can also expect this design harmony to follow suit in the upcoming future Mercedes line-up.

Moreover, the 5 sporty circular air-con vents are retained, but gone are the old numeric pad dial pad on the center console. In place now is a continuous flowing design language with the LCD digital instrument panel flowing into the auxiliary center console screen.

This is typically used for navigation. As standard, you get a pair of 7-inch displays. One serves as the instrumentation and the other for navigation at the center of your dashboard. Alternatively, you can upgrade it to a pair of 10.25-inch displays. As with any German car, the options are exorbitantly expensive when you start adding options.

Additionally, you can select from 64 different internal lighting colors. Speaking of ambient lighting, even the air vents have LED light strip within them which will change colours to whether you are cooling or heating the car. I am quite an idiot for interior ambient lighting. While ambient lighting, particularly customisable ambient lighting had been the norm in the mid sized segment and beyond such as the BMW 3/5 series, Audi A4/A6, C-class, it has yet to be implemented on a scale comparable to that in this lower priced segment.

Moreover, in addition to usual market offerings such as Apple carplay and Android Auto, you get a quirky implementation of USB-C data and charging ports. This does put the car quite ahead of its time, especially if you are using older Android phones with micro-USB charging or even, an iPhone. You can find these ports in the center console and below the rear Air-conditioning vents for the rear passengers. Good thing Mercedes got that covered with an included adapter with the car.

What is impressive is that Mercedes-Benz managed to cramp pretty much all their best tech into such a small car. Yes, you won’t get the active air suspension or the mood-changing air purification system on the S-class. And if you thought the Audi A3 with its digital dash and Google maps navigation could be the most technologically feature-packed car in this sub-compact segment out there. The new A-class just surpasses it. This propels the A-class to the top of the entry luxury compact car segment in terms of technology offered. BMW does has lots of catching up to do with their i-drive.

Additionally, the new MBUX infotainment system builds off from the previous COMMAND system. On top of a touchscreen, you can use natural language to control most aspects of the car. Notably, you can invoke a command to the car just by saying “Hey Mercedes” and your car will reply asking what it can do for you. Here, you can give it direct or even indirect commands. Direct commands includes the usual voice activated turn by turn GPS navigation. Also, you can tell it to turn up the air conditioning, open the sunroof or even what is the weather.

Moreover, you can also give indirect commands. The car will understand questions such as “It too hot in here” or “I am warm” and the car will set your temperature lower or fan speed higher. Moreover, If you are in for jokes, you can try asking your car “What you think of Audi/BMW” or “Tell a joke“. It will give you a reply which is quintessentially German (“I can’t. My engineers are Germans”).

The A200 is the base entry model for the A-class. In Singapore, it probably be the most popular engine of choice. Also, as compared to its out-going 1.6-liter predecessor on the previous A-class, the output of this new all-aluminum engine been increased by 11% with better efficiency. The A200 sports a new 163 horsepower (120 kW), codenamed the M282. It is a inline-four cylinder petrol engine delivering 250 Nm of torque with cylinder deactivation for fuel savings.

Small turbocharged engines are the name of the game today. Especially with meeting increasingly stringent emission standards. The new A-class has a displacement of 1.33 liters (some may round it up to 1.4L, though 1.3L is more accurate). Moreover, this is mated to a seven-speed dual-clutch offering a combined fuel consumption 5.1L/100 km and combined CO2 emissions 120 g/km. Additionally, you can option for a six-speed manual transmission variant with lower combined fuel consumption of 5.6 L/100 km and higher combined CO2 emissions of 133 g/km.

Still a Category B COE car

However, the new A-class still sits in the Category B COE. This is despite its minute 1.3L base engine. However, this can be made up with some savings in road tax over the long run with a lower engine displacement.

Moreover, there is no word whether there is a A180 petrol version. Though, you have two more engine choices with the A180d and the A250. The latter is the top spec below the AMG A45. It relies on a 224 horsepower (165 kW), 2.0-liter in-line four cylinder producing up to 350 Nm of torque. It is similarly mated to a 7G-DCT dual clutch transmission offering a combined fuel consumption 6.0 L/100 km and a combined CO2 emissions of 141 g/km.

The official word from Singapore’s Cycle and Carriage is that we can expect the new 2019 Mercedes A-class to be available in Singapore end calendar year 2018. Notably, the car has a Sedan version, starting with the A200L for the China market. It is meant to go against the current Audi A3 Sedan, as well the upcoming BMW 2-series (4 door) Gran coupe sedan due also in 2019. It has much more rear headroom than the current CLA. However, there is no word however, whether the China orientated A200L sedan will be hitting our shores.

Moreover, you can expect the incoming car to take the price point of the existing A-class. Ballpark figures of pricing to be in the similar range too of $120,000 to $140,000 new.