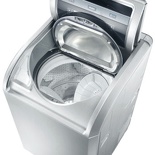 My mum was home today doing the laundry with the washing machine when it’s spin dry cycle suddenly went awry, and started lots of rattling noises seemingly going to spin itself to oblivion, before turning it off. Then the whole wash area suddenly having this musty but otherwise strong mold smell, something similar you get if you burn a fungi-loaded moist log or visit an algae infested lake. What’s more some of the clothes inside the machine where like patched with stains of mold, oh crap!

Ok great so something had to be done, and I had to do something, besides getting the occasional hint from my mother on me being an overqualified handyman for the job or rather being the only engineer handyman in the house at that time, and so yes, I had to do something. So there I was face to face with that 10 year old Hitachi top load washing machine which always loyally worked everyday without fail and maintenance in the confines of our laundry area. Theres obviously alot of mold deposits overtime, so it’s about time some maintenance is done too. Then just like any crazy scientist- Lets find out out this bugger ticks by prying it apart! Later do I know, there is more than it meets the eye.

Just like any household tale comes with it’s own set of journeys and quests, and man do we have baddies like the tons of brown mold stuck by all the inner walls of the spinner drum which took quite a hitch getting rid, not to mention many encounters with our arachnid friends who packed and left home. And yes there was buried treasure as well, $4.90 in coins to be exactly all nicely collected in the machine’s internal sediment compartment which you have to pry open for access. That’s together with some sand and dirt my dad joking said possibly originating from Lim Chu Kang training area which I always come back soiled from training.

It goes to say how much treasure you can find in these things, not to mention those you can find thrown off your void decks! The washing machine motor is old, but still up for the job, so is the safety clutch and drainage. I was really wary of 240v appliances running with cold water after cleaning and fixing things up, so I was like test-pen happy when I got it all fired up on test runs.

Things are working quite fine now, with an exception of a quirk with the safety latch mechanism which came loose on disassembly and a missing screw somewhere, hey at least it’s working now! In all, I can simply just take it like another adventure and episode on Discovery Channel with Mike Rowe on Dirty Jobs, maybe they should have some episode on washing machine cleaning!