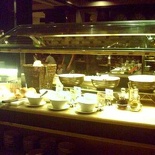 This evening we were at Merchant Court Hotel. Tonight was the planned second part of my mum’s birthday dinner celebrations with my family at the Ellenborough Market Cafe restaurant, only that theres no cake and cards planned for this round as compared to last week’s round. It’s an international buffet with an adequately sound spread of Local, Western, Thai and Seafood.

I remembered dining at the Ellenborough Market Cafe (not the like the free and easy movenpick marketplace or village) before quite a few times, but I didn’t had quite an impression of the place and I wonder why. The place is similarly lined and styled to a traditional market place setting typical to that of the early western colonial days with lots of china displays and red wood around to boot. Only that those big signs and posters dominating the walls previously had all been removed. 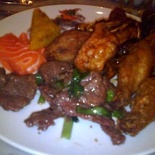 Though there’s more than enough in the international buffet to fill you up greatly, but what I think the place lack is variety within each of the various cuisines itself, it’s simply just a very large cuisine spread to encompass all, but not as much as I seen from other buffets of the similar price per head- There is just a small short row for Chinese and Western dishes all over the place. Theres a central salad bar a long dessert row which doesn’t really catch your eye with the exception of the rather nice durian pudding. A miserable Japanese section cease to exist with only 2 dishes which also seem to go empty despite being constantly refilled. Far tucked in a corner where the Thai and Seafood resides which I guess not many people know much of either. Then there this usual “chief’s special corner” where you can check back regularly for whats been served in the “first come first served” batter.

Quality is exception, no burnt or over cooked food so quality is very much on par with standards for the price range. Also, commendably, the staff there were exceptionally friendly and helpful, only that you can’t stay around past 10pm for a chat as it’s closing time by then. The place is always packed on weekends and if you are lucky, you can get a reservation indoors contrary to sitting outside by the river walk which by itself isn’t as good as it sounds. Seating, space and the ambiance is OK. Overall the joint is not a place for those who prefer the fine touch as it caters to more of a social group with prices slightly above most social groups would willingly accept. Not a place I would bring guests to, but otherwise a nice place for family dinners or with a group of school friends and such for a casual outing.