Completed the C&C 3 NOD Campaign on Sunday and the Scrin Campaign today, as usual all under Hard Difficulty. The last 2 NOD missions are commendably more challenging though, brings back the challenge of the old days a whee-bit – only if I pretend not to know that I beat it largely not due to tactics, but programmed “luck” and potholes in the AI – You can just miss out certain map triggers which will send the AI rushing, then you can just trick the computer into not attacking you so you can build a winning force – lame.

What I like about GDI is the new souped up Ion Cannon, it was just 1×1 square zap in the 1st C&C, then a3x3 zap in Tiberian Sun, a moveable laser in C&C Generals and now – an ion blast matching that of the Nuke! Totally Owning! 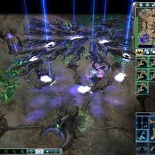 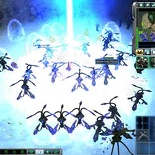 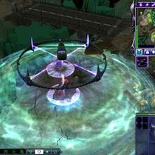 Other nice cool favorites of mine have to be the Annihilator tripod which simply rocks on assaults, otherwise the Mothership is another personal favorite with a high energy humming attack it just makes you go “OOOhhhooo” with each zap.

Undeniably C&C 3 sets a whole new benchmark in stunning RTS graphics in the C&C world, otherwise the most disappointing series so far, I believe. It’s storyline is so weak, it’s just too predictable and amateurish – a typical case of GDI fight NOD, then invaders come blah blah. Whats more the GDI and NOD endings are like HUH? so abrupt? No Ion control options at the end of the NOD mission? *hint*hint* . Furthermore, CG cut scenes are very disappointing as well – there are only a handful of CG cutscenes in the whole game (which are all often reused). However, good thing EA stuck to the old Westwood styled human acted briefings prior to each mission. Man, just hope EA don’t screw up the the C&C series any further name down with each release. Come to think about it, Blizzard still makes the best story-based games I still love the Starcraft story, let be Warcraft and Diablo as well.

Spiderman 3 Opens tomorrow, man will the cinemas be packed tomorrow.