Coach won’t be around for training this whole week so it very much self training this week, adding alot more flexibility into my timetable. Gymed out till 7.30pm on Tuesday. I think I might drop by the track, then the gym again on Friday evening. 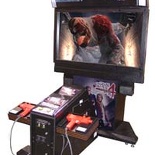 Class ended at 3pm today, took the MRT to JE for a few rounds of House of the Dead 4 at Zone-X Jurong Entertainment Center. It was my first time playing HOTD4 and the most I’ve got to is the last boss of Stage 2 where I barely beat “The Lovers” with just a slit left on the last CANCEL bar. Haha pity, but I guess even if I got to Chapter 3, I won’t survive loong either…

To my astonishment, once I am done playing (i.e I lost aka died, game over, nada life), I put the gun down, pick up my bag only to turn around and see 10 over people actually crowding behind watching me playing all the while. Haha quite paiseh, lost at 2nd stage only, but nevertheless a good game, and I guess I spoilt their movie by dying…. Which made me think about the interesting crowd-pulling nature of the game – I thought people actually wanted to play after me, but no one else actually came to play after I left, it’s like they all just simply dispersed like an electro-manget turned off.

I guess this game is something just like starbucks coffee, it’s almost like paying $1 for the coffee and $4 for the cafe atmosphere for your $5 grande. Personally I think arcade gaming is not much of action or just plain playing, it’s an exhibition of your skills, etc with a life audience, just like a coordinated performance, a display of precision, dexterity or arrogance if you are good I can say. It just swings on both ends of the pendulum, just like how the brokes does it with the DDR machine.

It’s a good start for me, but what I really like is the spray of SMG bullets, which I took sometime getting used to unlike my previous games with Time Crisis’s with single shot triggering. I guess with more practice I aim to complete the whole game in one credit. Not as if I’ve done if before, compared to the 3 I used today.

In case you wanna see the action, here’s the HOTD4 walk through:
Chapter 1 | Chap 2 PI, PII | Chapter 3 | Chapter 4 | Chapter 5 | Chapter 6 | End
And trust me, the game ain’t as easy as it looks on the videos. Though very helpful in finding hidden items…

One thing I like about HOTD4 is that this installment from SEGA is actually running the LINDBERGH hardware system which is actually a Pentium 4 3.0Ghz HT with 1GB ram, coupled with an Nvidia Geforce 6 series 256MB 3D card. Now that’s real power behind the panels, all complimented by a Toshiba 62″ Wide HD LCD screen, no wonder the graphics in the game kicks ass. The new Time Crisis 4 didn’t even raise any eyebrows.