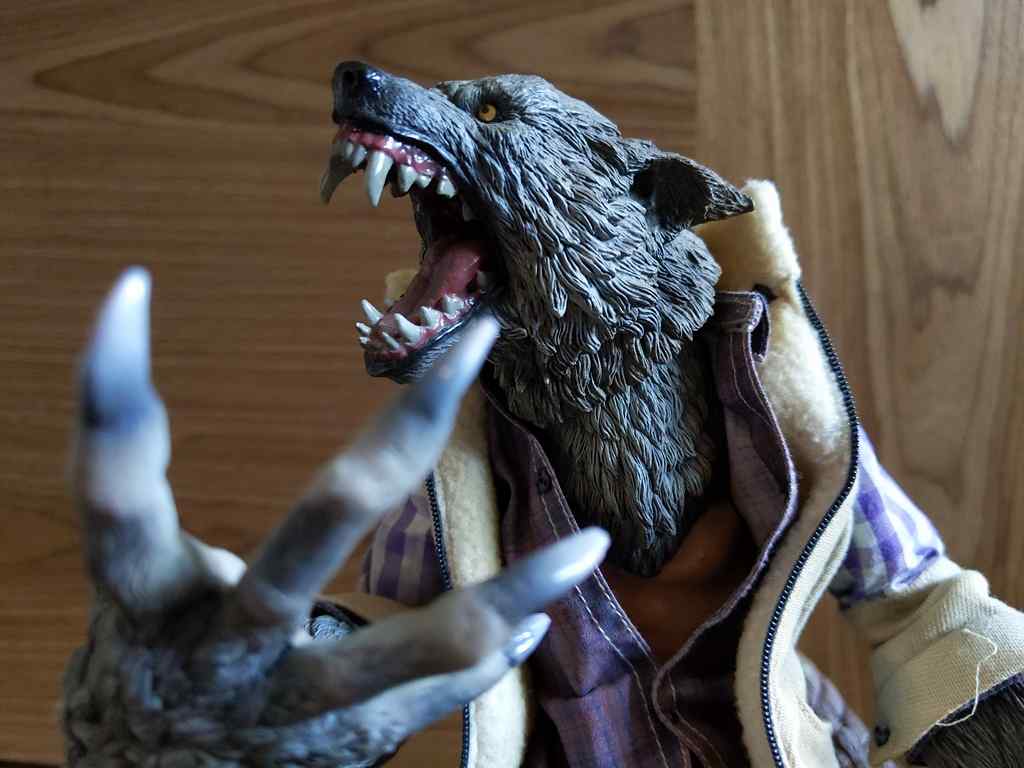 The Ouzhixiang Coomodel werewolf is premium collectable action figurine made by Chinese company COO MODEL Toys. They are a Chinese company that specializes in hyper-detailed figures. The Werewolf is a 1/6 Scale figure made as part of their Monster File Figure series, particularly, the Ouzhixiang Monster File Series which also comprises of Frankenstein, Dracula and a Mummy figure. Let’s check out the werewolf figure in the flesh today.

What is in the box and unboxing

The figure comes in three boxes, technically you get a box in a box, not including the postage package box it comes in. The final box is a black printed box covered with a forest-like pattern. For a $200-230 USD figure (shipped from China and delivered to you via express shipping in under a week), it does have a premium feel to it and does feel solid and heavy. The top over of the box is a large cardboard forest backdrop which can be used as a scene backing for your figure.

Moreover, the figure comes assembled in human form out of the box. Also, the figure sits on the number of stacked soft sponge trays containing the various figure parts and accessories. The werewolf arms and legs which comes as separate accessories within the box. You convert the figure by pulling out the human limbs and attaching the animal ones.

The main figure body is packaged center with additional werewolf head and neck shroud attachment. In addition, you also get 2 werewolf arms, and 2 legs accessory parts. Here, there are three sets of human hands one in pure human, one in werewolf fur and one in semi-transition.

Furthermore, the bottom tray of the Coomodel werewolf box contains several loose accessories like a duffel bag accessories, a small cloth doll which presumably has some kind of a backstory. On clothing you get a spare pair ripped pants for the werewolf and cloth hoodie attachment.

Additionally, there is a lot of really nice detail in the clothing. In human form, the figure comes dressed in a jacket worn over a lumberjack patterned buttoned shirt. The jacket has a pentagon emblem on the back which reads ”Sin latent death curse hunting”, which relates to some society involved in the character’s backstory. Also, the furred texture on the interior and neck guard. The shirt buttons are held via two small buttons.

Furthermore, the clothing on the figure is well-made and detailed. You can make out the individual thread seams on the trousers, even down to the details of the small coin pocket. You know you get like zippers which fasten and detach using a thin Velcro-like material. The pants which already come on the Coomodel werewolf human is intact, while the spare one is shorter and ripped at the bottom to accommodate the werewolf leg attachment.

Lastly, the figure comes with a large sturdy plastic base. It is nicely painted with a good amount of detail, such as moss and a textured stone surface. Some assembly is required to affix a clear plastic stick stand with a grip, as well as a dead tree trunk. There is even a small text standee provided in the box which say “Werewolf”. It does complete the entire package and adds to the premium finish feel of a well thought and finished product.

Moreover, the Coomodel werewolf has a good degree of pose-ability. Also, there is a good degree of articulation of the joints though they appear to be bit loose, which I shall touch as a quirk later. Each of the werewolf’s arms and legs can be rotated within a range of about 145 degrees for the elbows and knees. The shoulder, hips, thighs and angles are held in by ball joints which rotate in any direction.

Also, the removable arms and leg extensions are secured using peg-like fixtures. In conversion to werewolf form, you have to remove these upper forearms of the human model, as well as the 2 lower legs. In place are the Werewolf arms and the large werewolf leg attachments which adds 4-5cm of additional figure height. The parts are not too difficult to remove but quite a pain to insert back. The figure does look pretty menacing when posed. The height adjustable stand does support the figure well in a variety of standing and leaping poses.

Furthermore, the werewolf figure is of course not without its quirks. While the figure is great in quality for a Chinese toy, there are some oversights. Here are three worth mentioning.

Firstly, the arm and legs joints are too loose. In werewolf form, the weight of the heavier furred arms does droop down over time. The join connections themselves are plastic and held by metal screws which could be tightened. However, there seems to be a lack of locking on the screws and they will gradually lose their tension and pose. Alternatively, you could try to add some modifications like freezing the joints with adhesive or bluetack hidden under the clothing.

Secondly, the figure arm and legs attachments are pretty difficult to insert and doesn’t go all the way in. When not in fully, it does get quite annoying as it exposes some parts of the joints jutting out. Though this can be easily be covered by the model’s clothing sleeves

Thirdly, the figure shirt clothing does not button all the way up. Hence, it exposes parts of the untransformed human flesh under the neck piece in werewolf form. It could be a clothing oversight. While this is fine in Human form, the lack of shirt coverage with only two buttons glaringly contrasts the dark fur against the exposed human skin. A way to rectify this is to use a small safety pin to hold the shirt up, sew in additional buttons, or simply have the figure wear an additional plain under shirt.

Still, these gripes are still large minor and does not do justice to the effort and detail which goes into this product. Also, I do wish Coomodel improves on future iterations of the figure.

In addition to the figure is an instructional booklet with a comic story within. It allows you to understand the backstory of your in mandarin character through graphic scenes in mandarin. Also, the comic backstory tells a story of a the main character, presumably the protagonist seen running away from the authorities. Thereafter, he transformed into his true monster self to protect from what a flashback to a little girl (which I guess is how the little door comes into the picture). The comic ends transitioning to an epic battle scene where the werewolf holds his ground.

All in all, what COOMODEL has brought to the table here is a pretty quality product for its price. The Ouzhixiang Coomodel Werewolf is of course, not without its quirks. Still, the figure definitely gets my recommendation of a quality and highly posable figure with good attention to details. Kudos to Coomodel on that.