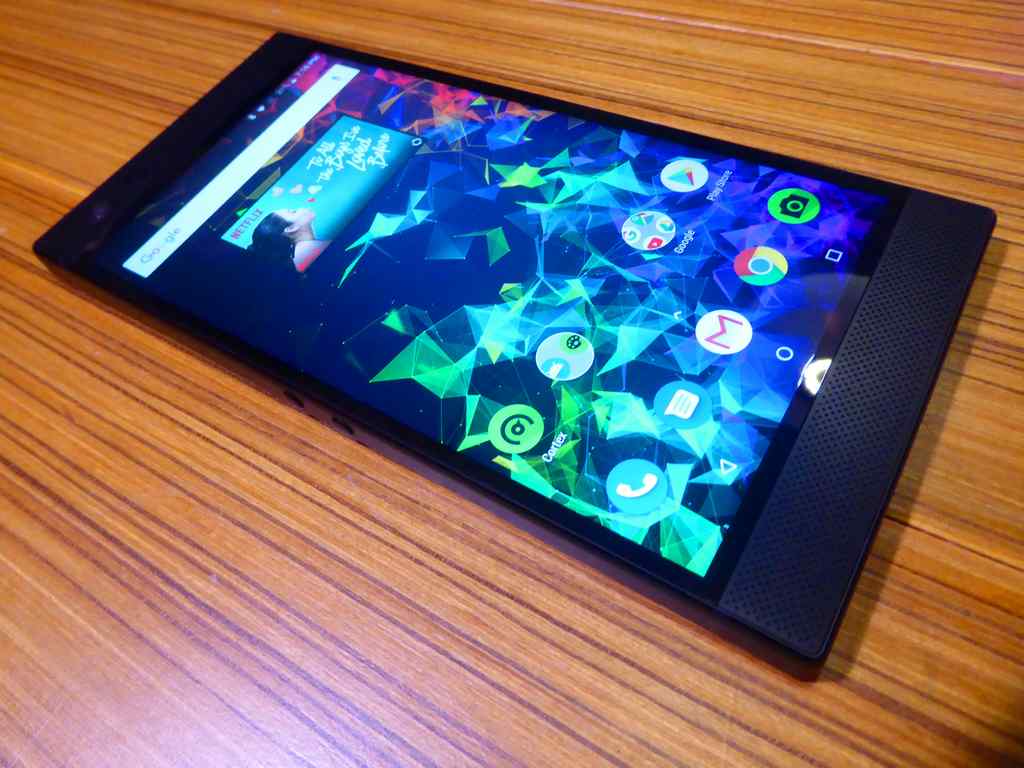 For today, I have a first look at the Razer Phone 2. Razer had always been a brand highly associated with high end gaming accessories, let be mice, keyboard, speakers and most recently hardware devices like laptops. When Razer first announced the Razer phone in November last year, it caught the mobile world by surprise. Never before had a gaming accessory maker gone into entering the phone market with a device of their own.

The phone got generally good positive reviews, but did not quite had the adoption as expected, let be compete in the already crowded smart phone market. This is particular in flagship range in the likes of Apple and Samsung.

Similar looks in a revised body

On first looks you can’t really tell the difference between the original Razer phone and this incoming model. This is unless you out them side by side. The differences are minute, the phone had grown about a fraction of a millimeter on both the width and thickness. It now has a thickness of 8.5mm from last model’s 8mm. It however, retains the same length dimensions. This bump in dimensions could be in place to accommodate the slightly larger screen.

Moreover, the phone still retains it chunky design which feels like a small slab in the hands. The industrial design theme is largely, well, Industrial with a full matte grey aluminum body with a rear glass face. This glass can be quite a fingerprint magnet. It does give the phone a more premium look, but I still prefer the metal back of the first phone.

Furthermore, the left side houses the volume up and down buttons, as well as the SIM and storage expansion slot. Also, the right side of phone still retains the integrated fingerprint sensor that also doubles-up as the phone’s power button.

The top of the phone is plain and simple. The stereo speakers on the phone are not located on the edges but rather the front face of the phone, directing them to the user.

The phone retains it 24-bit/192kHz audio output, but still has no physical headphone jack. A gripe, though Razer gives you Type-C to 3.5 mm headphone jack adapter included in the box.

Keeping to your guns- The fantastic 120hz display

You can see that Razer had stuck to what works in their first phone. Retained in the second generation phone is the fan-favorite and unique selling proposition of the phone- the 120hz IGZO display. This display is the major selling point of the previous device and still shines today.

Moreover, to match the screen refresh, the Razer Phone 2 features 120Hz touch sampling. It allows for touch input to be captured and synced to the screen. And yes, there is no notch. I can see the true value of this fast refresh rate not just benefiting gaming, but also for productivity use. The lag-free interfaces are a joy to use.

Furthermore, the screen has gotten a slight bump in size 5.72″. It retains a similar resolution of 1440×2560 pixels and sits under a layer Corning Gorilla Glass 5 (from Corning Gorilla Glass 3) with oleophobic coating. Screen brightness been bumped up alot from 380 nits to 580 nits, that is a 35% improvement.

The screen and front stereo speakers (a visually distinguishing feature of the phone) sits slightly repositioned in accommodation of the phone’s IP67 dust/water resistance. With that, you are good being submerged in water for up to 1m for 30 minutes.

Moreover, internal phone storage starts at 64GB courtesy of inbuilt flash. This capacity is thankfully expandable with an microSD card up to 1TB in size.

The phone received a bump in the processor department. It is however, more evolution than revolutionary. A Qualcomm Snapdragon 845 replaces the out-going Snapdragon 835, it retains the same 8GB amount of RAM and huge 4000mAh Li-Po battery.

The true benefit of the new upgraded processor, on top of better benchmarks is the availability to fully ultilise the dual 12MP cameras. A notable difference with the upgraded Snapdragon 845 process is the ability to record videos 1080p up to 120fps and 2160p up to 60fps. That’s an improvement given the previous generation phone could only do 2160p at 30fps.

In comparison, the front selfie camera take 8 megapixel shots with a smaller f/2.0 camera and records video at 1080p at 30 or 60fps.

Moreover, there are not much changes in the camera hardware department, though the dual cameras are now moved to the rear center of the device. Also, the dual tone flash now sits in between the dual lens setup.

The phone still spots the dual 12 MP shooter one with the primary wide lens spotting a f/1.8 aperture with a 1/2.55″ large sensor and the secondary, a 12 MP, f/2.6, 1/3.1″ sensor size, 1.0µm telephoto lens with 2x optical zoom. It comes with the usual bells an whistles such as optical image stabilization, dual-LED dual-tone flash, panorama and HDR modes.

Moreover, the phone now spots a really cool RGB 16M colour just what we see in Razer mice and keyboard, as well as competing products like Alienware. The logo now sits behind the phone is now lit. Which is a really cool touch. Also, Android users rejoice, the phone comes with Android 8.1 (Oreo) pre-installed from factory with planned upgrade to Android 9.0 (Pie). Though the internal storage is only 64GB, it is upgradable to 1TB micro SD with a dedicated slot.

The flagship 8 hundred series Snapdragons are notorious as huge heat emitters. Razer’s new vapor cooling system aim to address this with an integrated water-cooling system. We first saw this in Razer’s line of gaming laptops. Essentially uses as much of the phone’s rear flat surface area to radiates as much heat.

In size comparisons to the competition, the Razer does sits in on a slimmer profile than the incumbents iPhone Xs and Google Pixel 3, but is wider than the new Huawei Mate 20.

All in all, the new Razer phone 2 is a pleasant welcome into the flagship range of smartphones. I found it pleasant that Razer kept to what works on the previous model, and improving on features. However, you can argue that most of the features are more an evolutionary step than revolutionary.

But I found the Razer Phone has a class on it’s own when it comes to cool factor, boosted with a fantastic screen to boot. The Razer Phone 2 will be available and launching in Singapore on the 3rd November. With flagship specs come flagship prices too, expect prices to start from at a recommended retail price of $1,249 SGD, and exclusively only available through Singtel.