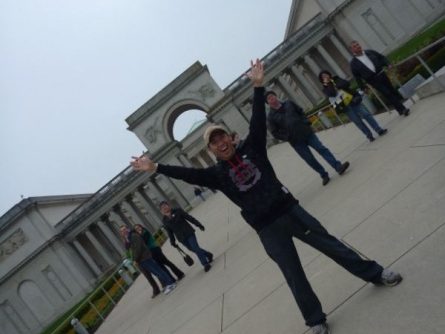 Legion of Honor Museum (Link: Museum website)
The California Palace of the Legion of Honor Museum is a Fine Arts Museum located in Lincoln Park, San Francisco and is the largest public arts institution in the city. The name is used both for the museum collections and for the building in which it is housed. Architecturally, I find the Legion of Honor one of the nicest looking museums in the city, with the exception of the palace of fine arts. The museum grounds and building itself, completed in 1924 is a three-quarters scale imitation of the Palais de la Légion d’Honneur, a palace located on the west bank of the River Seine in Paris, France, thus spotting a rather neoclassical building style which was prominent for buildings in France during that era.

The palace is part of the family of fine arts museums in San Francisco, comprising of this museum as well as it’s sister museum the de Young museum in Golden Gate Park. It’s not surprising to see various advertisement for the displays of both museums featured in either one. The route to the museum is served by a winding stretch of road passing into Lincoln park itself. Public transportation direct to the museum is rather limited here and is only served by Muni bus service 18, which stops by the museum’s carpark area and does a loop back. But there shouldn’t be a problem catching a transfer from a another bus service thereafter. 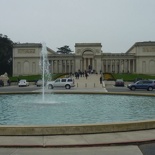 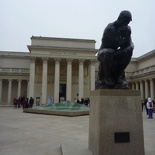 The thinker in thought 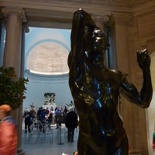 Regular entrance fee is $11, priced similar to that of the De Young, students and seniors go in cheaper and do have your ID and student passes with you if you intend to utilise the discount. The building sits on the high grounds of the Lincoln Park in the northwest of the city overlooking the Golden Gate Bridge and itself was the gift of Alma de Bretteville Spreckels, wife of the sugar magnate and thoroughbred racehorse owner breeder Adolph B. Spreckels.

Sitting in the heart of the car park is the museum’s fountain flaunting the front of the building. This leads up the grand walkway into the arched entrance where the palace courtyard resides. Home to the courtyard is The Thinker statue, greeting visitors in thought as they enter this portion of the museum’s with the glass pyramid skylight sitting in front of the building’s main entrance.

The de Young showcases American art from the 17th through the 21st centuries including international contemporary art, textiles and costumes. Despite it’s small size, the museum is pretty well spaced and laid out in my opinion, with very sleek looking galleries with ample lighting and nice finishes to go with the palace like atmosphere.

The museum itself is not large and is rather small in my opinion, it’s largely made out of many small compact galleries all linked together. These galleries are laid out in a straightforward manner, with galleries branching out of the central Gould Theater and ending with dead ends which can be quite a bummer as you have to re-walk the galleries on your way back again. This is unlike most museums which spot continuous looping galleries, with new sights on every connecting room. 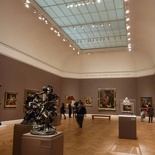 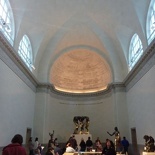 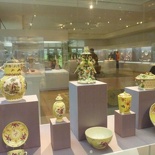 More featured art here includes that of the Americas, the Pacific, European and Africa. With the ancient collections dating back as far as 4,000 years. The museum is a family orientated one and a place for both the young and old. On the weekdays, many students and young kids can be seen here getting together with their teachers drawing sculptures in the Florence Gould Theater, which is accessible not far off from the main lobby. There were many panel events for adults too, such as pop quizzes, still-life drawing sessions as well as on-going tours around the museum as part of a scavenger hunt. 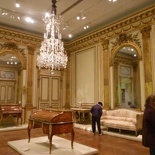 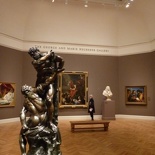 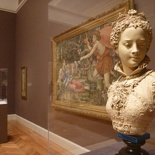 The museum has a single exhibition ground floor and a subterranean basement. The basement is home to the porcelain gallery, temporary exhibits, gift shop and museum’s cloakroom, where you can deposit large items and bags as they are not allowed in the museum in fear of people knocking displays or ripping paintings by mistake. If depositing valuables in the cloakroom is not an option for you, you can hand carry your bags around the galleries, just keep them off the displays and you will be fine.

The highlighted temporary exhibit then was Japanesque, which showcases ancient methods of making paper, prints and paintings. The display was a favorite with the guests there and though no additional entrance fee is required for the displays, the basement was packed to the brim with queue lines snaking everywhere. Good thing the queue lines run fast. It’s Japanese aesthetic in print, with the exhibits showcasing Japanese Print in the Era of Impressionism, which covers the evolution of the art, including it’s essence and it’s global influences around the world, particularly that inspiring European and American artists alike. 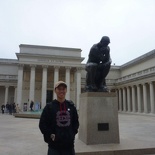 we are done here! 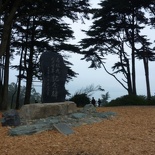 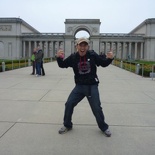 That’s all for the Legion folks!

From the vantage point off the museum’s carpark, you can catch views of most of the surrounding Lincoln Park Golf Course is on the site of a potter’s field called the “Golden Gate Cemetery”. What is iconic of the Legion of honor is the site of museum building itself, situated right up on the head of Lincoln Park, it’s literally a walk in the park. Rather, a scenic park walk, paths serving the Lincoln park comes right up to the alley of the museum, bringing you to a vast coastal sea-side walk offering breathtaking views of the San Francisco bay and Golden Gate Bridge, provided if it is not shrouded in fog that is.

That’s all for the Legion of Honor, it’s an honor visiting such a fine museum.

Now for our next and final stop, lets head into jail!

Next Page: On the Alcatraz (The Rock) »
City of San Francisco: January 2011