Home Blog Happy Birthday to me!

Today is my birthday! Yay! *runs around rejoicing* It’s neat having it on the term break holidays so as you can really enjoy every single bit of this day which you can truly call your own day off! 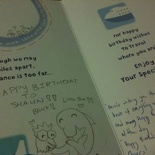 And so this is my first time celebrating my birthday overseas in a new environment, but the party seems to be on a different continent! I won’t be expecting anything fancy this year here (so as not to keep my hopes too high yet). But hey I was lucky to receive stuff from home, particularly this neat birthday card my family had sent me.

Confusingly, I’ve started receiving birthday greetings and well-wishes from yesterday afternoon onwards, wondering whether people are getting ahead of themselves, only to realize that it’s already the 25th of march in Singapore (where it’s 8 hours later here). Ahha and so it was! Commendably too, I am surprised that some greetings came from Singapore spot on at 12 midnight London time (8am SGT) as well, that’s impressive! Sooo, guess that’s what you get for long distance birthday greetings, nonetheless still very cool. I am glad everyone remembered, does make you all warm and fuzzy thinking about it.

Definitely goes in hand as quoted in my card with niffy hand drawings by Sheena: “Although we may be miles apart, no distance is too far”.

Just some fun for thought, I’ve compiled a short list of some famous people celebrating their birthday today too. Well, of course maybe excluding the few other thousands around the world celebrating too, but hey of course am not the only one!

Some notable birthdays for today:

I once heard this anonymous saying: Cool people have their birthdays in march. As how flattering it can be, I guess there might be some truth in that remark based on general opinion- we march babies can be quite a fun bunch indeed!

Just as how I like to I always like to use the quote: A year older, a year wiser! I do hope the same can be said for me- I just tend to find myself rather too bogged up to actually get anything properly done these days, let be even working on my short term memory (I think the lack of coffee have to do with this). Having said that, to wrap it up here on this post, as tradition on my birthday, I will be dumping all my work for the day (something which I never see myself doing since school started) and taking a chill out for some quality work-free time.

Man this feels good, bring it on day!