Home Blog Polytechnic Back from round Island Trekking 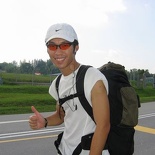 Hey hey, I am back from my group round Singapore trekking expedition. Overall the trip was rather manageable with the group generally seeing ourselves traveling the bulk of the journey on foot in the day, stopping to rest at regular breakpoints. Contrary to walking in the night (which we did on day-night 1), which is relatively cooler.

Our nights are largely spent resting for the next day, given the possibility of jet lag if we do it the other way at such short notice to our bodies. The expedition is largely self-sufficient, with us carrying all the food we need throughout the whole length of the trek, stopping at intervals only to rest and to refuel water from nearby taps and toilets, let be coffee shops or MRT stations. 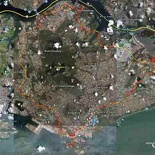 Short rundown of our journey
The average weight of our packs are at least 10kg, dropping down to about half of that on the last day. We always complete the planned distance for the day before night fall which gave us ample time to tend to our fatigue and blisters formed during the day.

The total traveled distance for the expedition is approximately 95km, avoiding the Lim Chu Kang area due to fears off running into life-firing areas. The whole journey is summarized as follows: 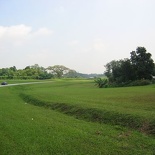 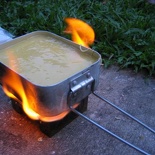 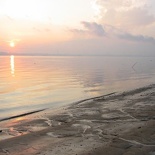 Interesting events includes setting up camp in front of Lavender where we had food breaks, not to mention and Aljunied MRT where we had lunch together with Bunsen Burners and such, attracting a rather great deal of attention from passer-bys. Thinking that we might be around for long, even an Aunte left us a her shopping bags to look after and went off to buy 4D! 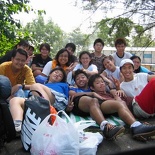 The toilets in our base camps for the nights are relatively still usable by my standards, with Sembawang Park one being the least favorite of the few. Sentosa’s toilets and showers are the best with music but most disappointing in water pressure. Pasir ris, though not very well maintained was the best of the few.

Amazingly too, despite after a long day, many of us still found time and energy to rampaging through the playground at Pasir ris park (spider nets are fun) and gather for card games. Nevertheless the dinner on the last day was definitely one big feast with loads of instant noodles, canned soup, baked beans and instant mashed potatoes, yummy!