Company Late Night Lan Gaming Session
With some time I have before leaving to the national stadium this afternoon, let me just talk about some things which happened during the past week, particularly yesterday and leaving the stresses of FYP aside.

Yes, and 1 week in advance, my boss called me up asking whether I can make it for their Lan gaming session where we would play Counter-strike after office hours in the wee nights in the office. So yesterday was the night and after a long day at school, project group finalizations and a short gym session and 7km run, saw myself back at home with enough time to settle down for some homework and some chores before rushing out again. 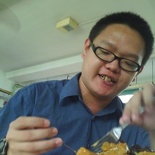 Guess what? Met my old Track and Field Ambassador Alec who unexpectedly popped by while I was having dinner at Bukit Merah hawker center. “Is this place taken?” I remembered replying enervatedly to that strangely familiar voice: “No it’s free”, looking up – Alec? Yes, it had been sometime since he dropped by for track & field training, even despite his ailing ankles, he never fails to make it down not only to support us for training but competitions previously, which were cut short by his current problems. From there, learnt that he was on a one day course at CMPB preparing him for the upcoming National Day Parade 1800-hotline which he would be manning soon and was on his way for dinner that evening where he met me. I was told that his mother recently passed away just recently, my sincere condolences going out to him. Nevertheless Alec is a very strong person, I really admire him and how strong and firm he stands facing everyday life and supporting himself, where most people would just crumble into oblivion. 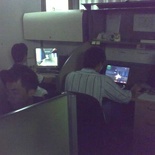 Took a bus to my destination thereafter and despite how well I love the way SMRT bus drivers speed along the roads, looks like the evening rush hour just eats into everybody’s traveling time. Played Counter-strike on our dedicated server till like 11.30pm, it’s a typical bring you own PC Lan party covering new maps like de_simpsons, old cs_mansion etc, really brings back the good old CS clan competition days previously, which actually “contributed” to my ‘A’ levels grades.

Taiwan Jet crash
I remembered watching news while on the treadmill yesterday about the jet crash in Taiwan, later do I know that one of my colleague’s old secondary school friend was actually one of the causalities of the crash – who suffered major burns to his body when the F5 jet crashed into the store room which he was was in. The Straits Times unexpectedly called him up during our gaming session for details on the causality background, assuming him being “related as a friend”. In the end, we all wonder where to the papers actually get their contacts from considering that my colleague actually didn’t keep in contact with his friend for years. Won’t be surprised if they have all your school and class records, besides your personal information at any go, scary.