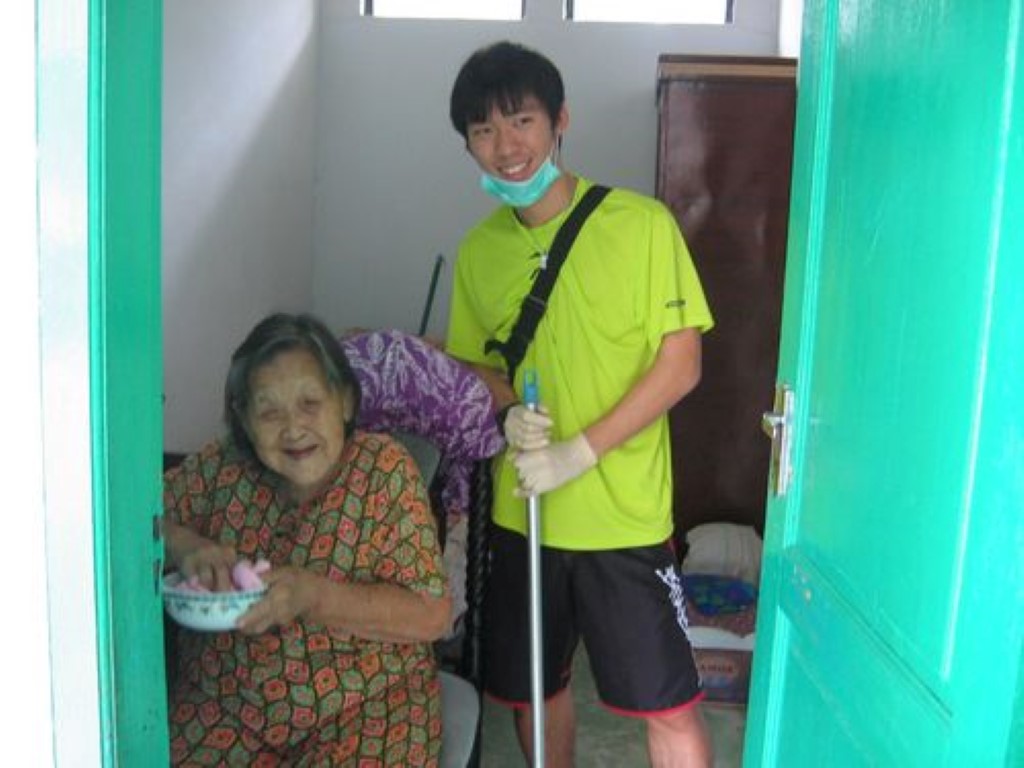 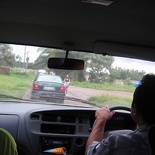 21th Dec Thursday – Woke up early in the morning, then it’s an hour plus trip out of Kota Medan to another neighboring smaller town where we encountered rather interesting padi fields and cow crossings upon reaching the rural area. Where the old folks home we are visiting for the day is located.

Old folks home visit
We were greeted by the caretaker at the home. Armed with face masks and latex gloves, we split ourselves in 2 groups- one caring for the elders themselves doing feet washing and pedicure while the rest will task ourselves to clean, sweep and mop the premises and their living quarters.

It was not easy cleaning up rooms which had not be kept in shape for years – and it’s not as easy as it sounds either, having to meet up with aged long accumulated clumps of lizard waste, cobwebs spilled urine/spit stools, prompting a water change for our mopping pails- which will all turn completely black right after cleaning one small room. Thanks to Lisa’s dad brought some scent/disinfectant tablet which he dissolved into the mopping water for a touch of hygiene and fragrance, also to rid the unbearable musky smell evident in a few rooms. 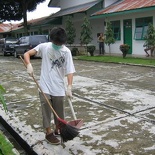 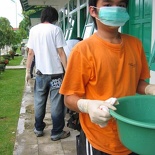 A mission to clean the place 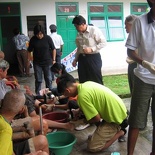 Including the elders themselves!

Many of the elders speak their mandarin dialects, which I personally understand and able to converse with, given my own grandparent’s naive language. We also get to converse with a few elders who were in their rooms during cleaning who kindly tell us about how appreciative they enjoy our company, besides sitting down for a casual chat or two, which I kinda have problems doing as I can only understand dialects but not good at speaking at all. But I guess actions speak louder than words – Mopped 6 rooms in all, a tiring yet full filling task given the happy smiles from the occupants. 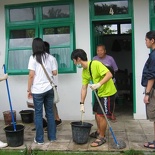 sweeping, wiping and mopping the premises 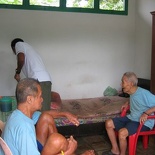 The place is indeed dirty. 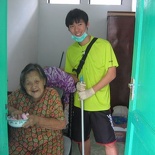 but the rewards at the end are priceless…

If only they could see me smile behind the mask (the one we wore when cleaning the area), we all have funny feelings, like a sign of happiness with company yet mixed with pity for them. I just feel that little bits like cleaning up their area and chatting with them – it’s just one of the things you can do in your abilities to make them feel better, given their situation (and mind you it don’t not always have to be monetary aid). The satisfaction you get from their response especially when you reveal your smile behind your face mask, it’s just little things like that which can make a person’s day.

Before leaving, Isabella’s dad chatted to us about the differences of Singapore old folks home and the one in Singapore. As it’s a trend back at home for parents to throw their parents into old folks home. In his opinion, he will never put his parents in a home and just leave or abandon them, even if it means buying a whole new home and employing maids ($150-200sing/mth) to care for them personally. As filial as it sounds, it’s very different back in Singapore though, it’s just too expensive. Furthermore given our pace of life, there are many contributing factors of the increased dominance old folks have in Singapore such as better healthcare and higher life expectancy.

After giving the place a whole clean up, we bid the elders farewell and left the place thereafter on our long journey back to the city of Medan. 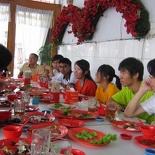 Admin Time
On our journey back, took some time to reflect on the standard of living in Medan – it’s so much relatively lower than home. The average happy worker earn the equivalent of about $sing200-300/mth (in Singapore standards it’s something to be alarmed at) but with things very much cheaper here, it sufficiently adequate and would definitely be beneficial to the poor as a whole.

However, to the rich, sadly it’s a point of exploitation , thus the large rich poor gaps here. At least sanitation and water here is largely adequate and of an acceptable standard, thus reducing or eliminating such contributing factors leading to possible poverty here. 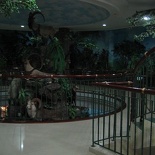 Our last stop for the day was the Medan wildlife museum for a visit. Showcased are an assortment of animal exhibits, spanning 2 floors and ranging from antelopes to a myriad of birds, bears and big cats, on top of a rather minute insect collection. Lined along the walls are all awards, certificates & photographs of the hunter (owner and founder’s) hunting trips around the world – A nightmare to any wildlife conservative- gunning down of majestic white rhinos, antelopes, big cats, all proudly displayed as exhibits and plaques line all along the walls.

We met the founder halfway through the exhibits, where we chatted momentarily, he told us that he is based here and his wife, a Singaporean with their daughter studying in a Singapore University. Heh. We were given a goodie bag filled with 4 packet drinks each upon our exit thus finally justifying the high entrance fee.

Seafood dinner was courtesy of Lisa’s family at a coffee house. We had 2 types of fish on top of 2 dishes of vegetables and the usual fried sotong. There we even planned our next day visit to a local mental hospital and tied down the plans and confirmation for our arrival there tomorrow. 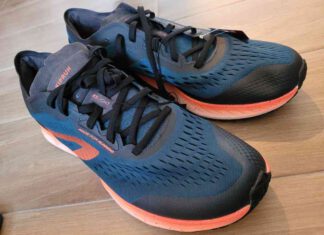