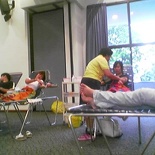 🙁 Its another long 8am – 6pm day today at school today. Started with my dragging my feet into the lecture hall for a full morning of lectures, what else can I do but even think of donating blood at the end of the day? Held at the SP staff center, it was my 2nd time donating blood. The HSA volunteers were very kind & courteous, they just simply can’t stop thanking us for donating, its like we are really doing something great or like “heros” duh! Neither do they know that most students are donating for CCA points, but that is a tie-down between the students & the school anyway, with the HSA out of the equation. But I guess that helped alot on in-flux of donors to the staff center.

😯 Despite being a donor before, I still have to go through the long screening & registration process (up to 2 hours before being poked) even donning my donor card. I can understand the requirement for compulsory health screening on visit, but filling up of particulars? don’t the HSA have past donor info on their databases? *Hint*Hint*

😉 Donating was fast, with some interesting dramas happening around my immediate vicinity during my period of “draining” – Some feld dizzy/propped legs up, looked like they rode cockscrew 20 times in a row, waited like 2hours to donate only to learn that they can’t donate after they can’t locate a vein… pity them. Donation was fast & smooth for me, I even got a niffy blue bandage, chatted with the SP red cross volunteers about offers & qualifications they provide as a first aider, anyway, later do I know that my SAF first aid & CPR license can be converted to a civilian one quite easily if I join them. Moreover, if I have a driving license, I can even be an ambulance driver, (so as they require too). Duh! 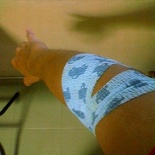 🙂 I was greeted with another Fujitsu Laptop box back at home, this time its Sheena’s laptop which arrived today. Got about installing some programs for her before heading out for dinner at Redhill Market before cramping myself back in my room doing backups. This Fujitsu E series 8020 was purchased from Asiapac at a school discount rate offered to both SP, NYP & RP. The best deal from RP offering free upgrade to WinXP Professional, & bundled with Visual Studio 2005, Office 2003, not to mention anti-virus (which I don’t really need in place of norton) & niffy little anti ad/spyware programs installed. Anyway, anyone can buy laptops at the student rate as names & admin numbers are just needed for paperwork purposes. There are even groups on hardwarezone.com taking orders from the public to order the laptop as “students” for the extremely low subsidised prices. Nevertheless I did make 2 orders, one under my name as a rep in SP & the other through RP, being perfectly substitutable, I canceled my SP order & went for the RP one instead.

Took off my bandage only to see a small exit hole, surrounded by a 1cmX1cm light blueblack. I guess the most painful part of donating blood is not the needle, but the part when you have to pull the plasters off the wound without plucking any hairs off your arm!