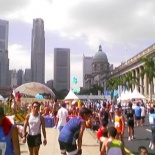 It was already 10.30am, the time where most marathon runners would start finishing. A very hot day last Sunday, with the sky clear blue & only a thin streak of white in sight – a morning scene to behold too at the Padang. Only thing is that I am not clad in my running attire, neither was I exhausted. Yes, I didn’t ran the marathon. Contrary to what you may think of me as a siao-on runner. Partly as I was down with a fever since last week’s Trialthon & didn’t have enough time to fully recover to take on the 42.195km this year. But I was very much there in person to cheer on the community runners, not to mention my school mates at the finishing line.

The failure to return the champion timing chip will result in a $50 penalty, it being a loaned item from the Singapore Sports Council so all non-finishers have to return it hook or by crook. But why mail it in when I can return it at the event? The interesting thing is that upon personally returning it there, I was immediately given a finisher medal & shirt… duh regardless who whoever did it, even if you never ran it!

Heard that baggage collection & distribution was as messed up as that of AHM this year, haha looks like the professional reputation & organisation SCm04 had was definitely tarnished by that of this year’s event.

Back at home, I made a stand not to wear the finisher’s shirt, nor display the medal till I rightfully clear the 42km, next year of course! Infact I shouldn’t have taken it as I didn’t deserve it at all! I won’t take “qualifying the 42km distance from past marathons” a benchmark to don the medal nor the finisher’s shirt but only ones which I yet to face & complete. Only when then a new benchmark will be made, then the fruits may it be reaped.

Oh yea, last but not least, to those who ran & completed this year’s marathon with whatever timing you made, whether its even sub 8hours, 4hours or even made your PB, Congrats. See you all at next year’s marathon! & remember always as quoted in the Olympic creed, its not the competition which keeps the games on, but the desire to participate & complete.