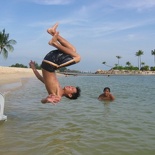 And in a flip! it was, haha met with my class at about 9am this morning at habourfront MRT, where breakfast at Macs followed thereafter. Spent an awful 5 bucks plus there on a big breakfast not knowing about the $2 breakfast deal.. DANG! Anyway, at least I gotta the try big breakfast with maple syrup, a totally new sweet experience I say. After some planning & carefully calculation, we decided to take a cab into Sentosa, considering it being the most convenient & economical option that point of time, not to mention minus the hassle here & there. Next thing there we was straight at siloso from habourfront Mac Donalds at only an additional 30 cents per person compared to taking a bus there.