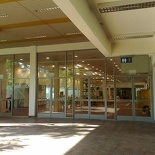 Every visit back to SP now is always like a treasured moment- something I do not do very often much as taking it for granted for everyday when I was a student there. Whether it is saying meeting my lecturers and student officers there or catching up on happenings around campus, it seems that things are very much different from what it was previously seen as a student and the contacts you make will go a long way.

Infrastructure wise, it seems that much has changed around the area now, especially with the new rebranding efforts around the campus. From the new signs flaunting outside every corner of campus, to the new improvement works around the area such as Food court 1, food court 2 and now, food court 3. The campus is really taking quite a major face lift bit by bit. Food court 3 was particularly interesting as it will be the 2nd and next food court to be air-conditioned. Also considering that the only food tendants there being KFC and Pizza hut (who already have their own enclosed air-conditioned area), the new food court spots new relocated dedicated washing areas previously where the garage area. Presumably all the eating areas will be open and shared between Pizza hut as well as KFC just like those 3 in 1 KFC-Pizza-Taco bell restaurants we see in town. The area might offer new glass windows all round and views of the pool area. With shared air-conditioning, the popular book shop as well as the stores lined along FC3 will definitely see open door policies from now on. 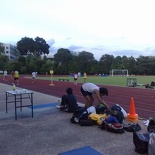 Happened to drop by Track training over one the active days. Training is still all largely focused on specific training for events, especially with the IVP currently on. You can still make out the few distinctive groups training all round the track, each having their own dedicated space around the track area for their respective group training.

I can say that training is rather more focused now, and the degree of specialization offered by each of the coaches for specific events is far better than what it was previously done with only one coach. So rather than having training like a jack of all trades, now we can see the team doing more events than what it can do previously such as more field events like discus, high jump an javelin- events we didn’t even consider doing many years back. Everything looks promising and I believe we can seniors can leave it in the hands of the current coaches and juniors too.