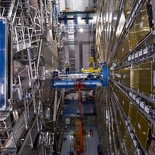 Far out in the Franco–Swiss border near Geneva, CERN’s (The European Organization for Nuclear Research) first phase of single directional beam fire was successful. It will be a matter of no time where the 2nd opposing beam is fired for some atomic smashing fun, allowing physicists learn about more about the laws of Nature as almost “recreating” the big bang and the following bolts and nuts of the details which follows. A possible consequence of this is the possibility of the project creating mini black holes which could pull all forms of matter (including planets) into, marking a possible impending dooms day, also as shunned upon by activist’s worldwide boycotting the experiment. Haha no one’s listening! Go science!

Geneva, 10 September 2008.
The first beam in the Large Hadron Collider at CERN was successfully steered around the full 27 kilometres of the world’s most powerful particle accelerator at 10h28 this morning. This historic event marks a key moment in the transition from over two decades of preparation to a new era of scientific discovery.

“It’s a fantastic moment,” said LHC project leader Lyn Evans, “we can now look forward to a new era of understanding about the origins and evolution of the universe.”

Starting up a major new particle accelerator takes much more than flipping a switch. Thousands of individual elements have to work in harmony, timings have to be synchronized to under a billionth of a second, and beams finer than a human hair have to be brought into head-on collision. Today’s success puts a tick next to the first of those steps, and over the next few weeks, as the LHC’s operators gain experience and confidence with the new machine, the machine’s acceleration systems will be brought into play, and the beams will be brought into collision to allow the research programme to begin.

Once colliding beams have been established, there will be a period of measurement and calibration for the LHC’s four major experiments, and new results could start to appear in around a year. Experiments at the LHC will allow physicists to complete a journey that started with Newton’s description of gravity. Gravity acts on mass, but so far science is unable to explain the mechanism that generates mass. Experiments at the LHC will provide the answer. LHC experiments will also try to probe the mysterious dark matter of the universe – visible matter seems to account for just 5% of what must exist, while about a quarter is believed to be dark matter. They will investigate the reason for nature’s preference for matter over antimatter, and they will probe matter as it existed at the very beginning of time.