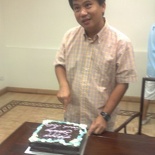 Yesterday (Saturday) night was our planned coach birthday celebrations and it was a secret very well kept in place for our “host” friend who faked her birthday so that we can deceive our coach into attending the party last night. Everybody knew that, except well… coach until last night haha.

Held in home premises at the Holland area, the gathering saw the reunion of new and old track and field members (about 30 of us) all either while serving army or working. It’s was a good time to meet up with everybody and keep ourselves updated as a whole. Got to know how many of our track mates are doing in the army now, especially those who are starting their Pro-term after completing their service term in OCS. So for the guys, it’s mostly army talk while it’s mostly university and plans for the girls.

Much of the early part of the day is spend lazying around by the house pool and garden swing with Ahlong and Elrick while waiting for the rest of the Alumni track team to finish training in SP and make their way to Holland Rise. No one wanted to swim, so our other variant of “pool” in the basement kept us occupied for most of the time. 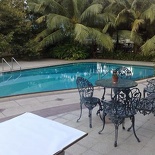 A day by the pool, swings and durian trees 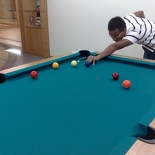 Some Pool to spend the time 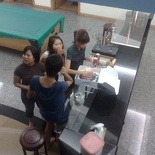 And oh no our cake is discovered!

The girls did an excellent job on the cake as well as the presents all done up so nicely. Everyone chipped in a sum each for both the catered buffet dinner as well as the cake and presents as a whole. We got everyone in a room together with coach where we sang the birthday song to HIM, at first he didn’t know how did his name Robin came into the birthday song, till he later found out that the purpose of the whole celebration was for him! Man was he surprised! Cake was served together with dinner thereafter. 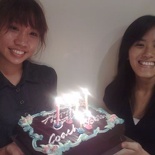 We present the cake for the night! 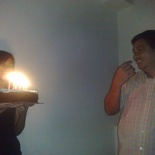 The cake is for me? 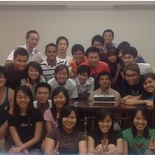 The rest of the night was spent with games and slacking in the home cinema room. Alvin and Alec came as well, but not till later. Jonathan and Elrick was there with their fair share of army Commando experiences from their side, especially with their interesting topic of heli and air-borne operations. 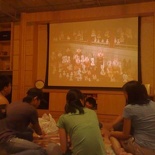 Derrick was just, well being himself most of the time and did quite a good job in giving us the impression of technician work in the SAF being more prestigious than it really sounds.

Weijian is now studying in PSB and KC’s stories of police life in the ops room paints so much of how complaintive Singaporeans can be with our 999 hotline over the slightest things, let be the flux of dumber than dumb calls from the public on Mas Selamat.

Richard who lived nearby came as usual in his yellow Ferrari F430 convertible, making his usual loud entrance by the house gates and joined us for the cake cutting session and dinner before staying for some chats before promptly making his departure, he’s always a busy person.

Well wishes going out to Alex who cannot make it down for today’s celebrations as he’s recovering from a viral lung infection and was previously in ICU. We wish him all the best in speedy recovery.